First it was Bergman, now it's Michelangelo Antonioni. They were roughly contemporaries, although Bergman's influence on English language cinema was more indirect, whereas Antonioni made films in both England and the USA.

Blowup was filmed in England, with David Hemmings wandering listlessly through late 1960s London, observing without ultimately seeming to have much effect on anything. Fashion, murder, Yardbirds, Vanessa Redgrave undressed, and an invisible tennis game, and he's back where he started, perhaps wondering what he has achieved, apparently musing on what is real, what is not, and what can't be proved. 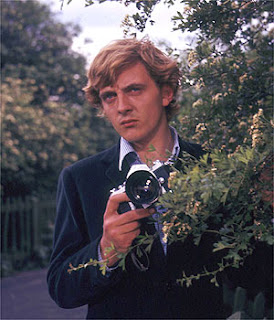 Zabriskie Point, set in the USA, was either too long ago or not sufficiently memorable for me, although I do recall a young couple wandering aimlessly around, then rolling in the sand. Then a house blew up. I might not be doing this film justice, but it's certainly not as high in the pantheon as Blowup, or a later film, The Passenger.

In that film, Jack Nicholson... wandered aimlessly throughout Spain. Languid, but harried.

Of the Antonioni films I've seen, the silent, lingering shot figured frequently. Unsurprisingly, one of his frequent themes is said to be a general purposelessness in the protagonist. Their ultimate effect is more of a mood than a plot, and they do that pretty well.

Blowup (titled from Hemmings' photographer who does greatly enlarge his pictures at one point, seeking answers that are ultimately withdrawn) was remade in the US as Blowout, a Hollywoodish admixture of Blowup and Chappaquiddick, focused on a tyre's blowout. The plot was given greater definition at the expense of mood and contemplation.

Which, to turn that last sentence around, is perhaps a reasonable approach to Antonioni's work.
Posted by S Simmonds at 10:09 pm