Using a variety of methodologies, it ranks countries by the proportion of the civilian population with guns.

Confirming the centrality of its loopy gun culture, the US is top in terms of both the total number of firearms, and the number of guns per head of population. By a long shot. 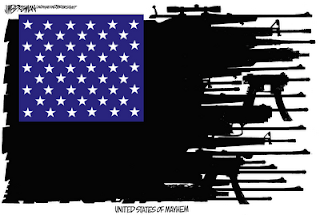 In the US, there are 90 guns for every 100 civilians! That's nine for every 10 men, women, children and babies! For a grand total of 270 million guns.

In the English-speaking world, Canada has 31 guns per hundred people, Australia has a surprisingly high 15, while England has an eminently sensible 6.

A gun culture is a travesty. Unfortunately the world is flooded with it, courtesy of Hollywood and the rest of American culture.

The study doesn't paint a clear link between gun ownership and violence, although I would expect homicides to be well up in countries with high gun ownership. Inter alia, it also says gun ownership increases as the wealth of a country increases [surely with notable exceptions], and it notes that factors in violent cultures include rapid urban growth, poverty, and ineffective policing.

Update 14-Oct-09: Something that may surprise some Americans: New Scientist reports that carrying a gun makes one more than four times more likely to be killed.  And when the victim had the chance to defend themselves, the odds of being shot were even higher.  As the article mentions, the US has the highest rate of gun homicide in the world.

Email ThisBlogThis!Share to TwitterShare to FacebookShare to Pinterest
Labels: crime

You should read the study by harvard law on the relationship between the number of firearms in a country and the murder rate. It is the exact oppposite of what you are suggesting.

Hmmm, Harvard studies... a dime a dozen. Here's one from 2007 (): "States With Higher Levels of Gun Ownership Have Higher Homicide Rates".

Here's another one from 2002(http://www.highbeam.com/doc/1P2-13802918.html) that found a "positive and statistically significant relationship between rates of household gun ownership and homicide victimization for the entire population."

In mitigation, there's a Harvard study with a counter-finding (http://209.85.173.132/search?q=cache:tqveW6QjOnoJ:www.law.harvard.edu/students/orgs/jlpp/Vol30_No2_KatesMauseronline.pdf+firearms+homicide+rate+harvard+study&hl=en&ct=clnk&cd=1&gl=au). This one would seem to be at odds with other studies around the world.

I also note that that one appears to be highly politicised and from the Law faculty, whereas the first I mentioned came from Harvard's School of Public Health.

Without doing a comprehensive meta-study, I'd say the evidence is strongly in favour of gun ownership leading to higher homicide rates. This is intuitively rational, too: guns are a quick and easy weapon, and the faster the weapon, the less opportunity there is for the perpetrator to cool down somewhat.

Oops. Missing link to the first study mentioned above: http://www.hsph.harvard.edu/news/press-releases/2007-releases/press01112007.html