Yesterday at work, astronaut Jim Reilly gave a presentation on his experience.

Half the time was spent giving a potted narrative to a video compilation which covered the full range of a space shuttle flight to the international space station and back.

The other half was, of course, questions.

It was a great opportunity to get a first-hand flavour of life in space. And to understand better. For example: what are the longer-term health effects of living in a (weightless) environment that our physiology is not geared for? What did he personally feel were the biggest risk factors? And how did he get there, from a doctorate in geosciences?

Unsurprisingly, he was still quite starry-eyed about the experience, and reckoned he had at least one more mission ahead of him, before shuttles are phased out in the next three years. All the astronauts in his intake were people who had spent their whole lives aiming for that very thing. When I was a kid, the standard career path was fighter pilot to test pilot to astronaut. However, that’s not strictly the case these days. Although Jim did initially get some fighter pilot experience, the bottom dropped out of the war market at the time. He went on to do geological work in harsh conditions such as Antarctica and in submersibles, and so by the time he actually applied, all his experiences proved useful.

Age is not a barrier. He was selected at about 40, and he'll be about 55 on his next trip. He pointed out that the astronauts were of course fit, but not superfit - there were a variety of experiences and exercise regimes.

But certainly there's a whittling-down process. With an intake of 20 people who were (presumably) just as well qualified as he, only about 10 made the final cut.

He noted a few health-related points. First was the reorientation necessary: from an earth-centred perspective to a “head is up, feet is down” perspective. This can be disconcerting. You turn around to answer someone behind you, only to find they’re upside down. Gravity, when he first got back, made it hard to navigate through doors – he might easily hit the doorjamb as he went through. And he told of one astronaut who forgot himself while watching tv back home. He put his glass in mid-air, only to have in crash to the ground. So short term, the effects are disorientation. He also noted that the three most definite desires when he would get back to earth were, in strict order: a hot shower, a cold beer, and fresh food.

I asked him about risks. He’d had long experience in risky environments, and he was constantly analysing all the risks in each situation. And at any point in time, he’d analyse most of it away, to be left with two or three things that he’d just have to accept could happen on a bad day.
He noted however, that there was always a team on ground, also constantly analysing risks and looking after them. So, in all, he said his heartbeat tended to stay pretty even through the experience.

One unexpected point was about stars. Most pictures of the shuttle or space station didn’t show stars, simply because the luminosity of the vehicles’ surfaces tended to obliterate the background light. But when he looked away, away from the sun, the stars were much more numerous and bright than we would imagine. All different colours, too: blue, pink red… and staring long enough, you could resolve blue blobs into whole galaxies. 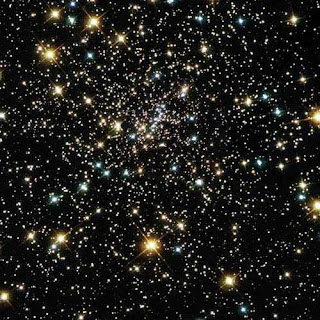 Well, you can capture that in a photo. But it's not the same.
Posted by S Simmonds at 5:44 pm