Mary was my wife's aunt, my mother-in-law's sister. She died on Saturday after a brief illness, a month shy of her 85th birthday. 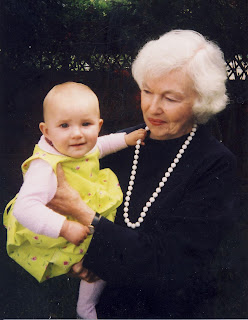 Although she was at our wedding, I only got to know her gradually in the following years, as she also got to know and take delight in our young children.

She was a retired nurse, and lived by herself in a meticulously-maintained flat, never having married. I had been concerned that she was somewhat isolated there, but at a gathering today after her funeral, I found out otherwise. There were neighbours in her small apartment block that provided her with some of the necessary, more immediate human contact than we could provide.

Yet she was largely a self-contained person, as one might expect from her background. She was well-travelled, strong willed, and took an interest in politics, as well as reading - mysteries in particular - and bridge.

I was privileged to be able to spend some time with her at her bedside in the week before she died. She was pleased to see recent pictures of the kids, and expressed good feelings about the Prime Minister and acting Prime Minister: in particular, Kevin Rudd as a thoughtful and very hard-working man, and Julia Gillard being very intelligent.

I was very interested to see a number of photos of her that well pre-dated our acquaintance. It strongly brought home to me the life she had lived that I knew very little about. Photos that showed a lively young woman far removed from the gentle old lady I knew, yet with exactly the face and the look that I knew. A thoughtful and caring person; I am glad to have known her.
Posted by S Simmonds at 10:54 pm