Multituberculates are an early order of mammals that was very successful - as mammals go - during the Mesozoic era (in the shadow of the dinosaurs), but became extinct in the Paleozoic, at a time when mammalian species were radiating to fill the gaps in environmental niches left vacant when the dinosaur-killing meteor hit at 65 million years ago. 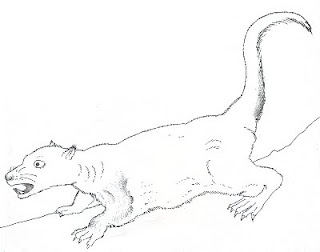 Their molars each have rows of tubercles - cusps - hence the origin of the name. Teeth are frequently an important determinant of how and what any given species eats, and thus their longer-term survivability. Much analysis has been given over to this aspect of mammalian evolution. (Yet toothed names are sometimes given simply because teeth are all that are found of a given species).

Multituberculates (covering a variety of species and environmental niches) survived to the end of the Eocene (according to Kielan-Jarowowska), perhaps up to 34 milion years ago. Their niches were roughly those filled today by rodents, who are perhaps the most successful - and definitely the most species-numerous - modern mammals.

That might suggest that the Rodentia order actually crowded out the Multituberculata order, and was more fit in evolutionary terms. In fact, Kielan-Jarowowska reports a 1966 review (Van Valen and Sloan) that concluded their demise was due, successively, to condylarths (early placentals, now extinct), primates, then rodents.

As an older lineage, they were close to the monotremes (which are the most basal surviving lineage of mammals), but were slightly more derived ("modern"). Are Multituberculates egg-laying (oviparous) or live birth (viviparous)? Kielan-Jarowowska (from an older study) refers to them as viviparous with an "extremely small neonate". It lists this as a competitive inferiority, along with an abducted (or sprawled) limb angle. This latter would have made prolonged running more difficult than for its competitors.

Note that the New Zealand fossil, the SB mammal or "waddling mouse" had a 'somewhat abducted' posture. Yet that creature survived until 19 mya - isolated on an island chain that had no other mammalian competitors.