Former US President Jimmy Carter is a Democrat superdelegate. It was announced (by the Carter centre) that after polls closed in the final two Democrat primaries (Montana and South Dakota), Carter would pledge for Obama. 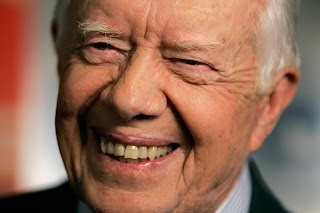 One wonders why he didn't do this before the primaries were over. Various news reports (here as well) point to an earlier surrogate endorsement when he said his family [children and grandchildren] supported Obama. Yet the Republicans (their National Committee) is reported to be active on the anti-Obama campaign by passing to journalists a two-year-old video in which Carter was apparently critical. The problem? Obama didn't yet have the "proven substance or experience".

Well, if that's all they can dig up, the Republicans are in trouble.

Carter also apparently said he regarded Al Gore as the best candidate (he wasn't ever to run), but if Hilary Clinton nominated, he would support her. But that was two years ago.

I'm not convinced that that earlier pledge was all that was behind the timing of Carter's official backing Obama. It's plausible that more superdelegates would have got behind Carter if he'd endorsed earlier, to the point of tipping the balance earlier.

Was it equivocation in any sense? A sense of duty to an earlier commitment? Or were (at least some of) the Democrats strategically opting for a lengthy primary campaign, calculating that prolonged exposure would outweight any internecine negativity?
Posted by S Simmonds at 7:44 pm