I record the following recent news report, which has quite meaningful implications. Some questions on the reportage niggle me, which I will record below, hopefully addressed when I find out more.

Australian scientists have found that life on Earth begain much earlier - and progressed faster - than previously believed.

The scientists, from the newly-inaugerated Centre for Astrobiology at the University of New South Wales (a short walk from here) studied stromatolites in tidal pools in Shark Bay in Western Australia. Stromatolites are traces left by bacteria life (as opposed to fossilised remnants of organisms), composed of calcium carbonate, the same substance shells are made of. 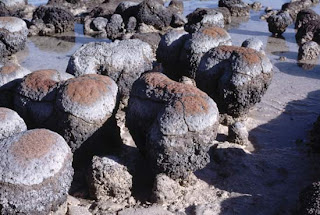 The Shark Bay specimens are very recent, dating from 10,000 years ago up to the present - uncommon, because stromatolite formations usually date from carbon-dioxide-rich times, prior to the buildup of a relatively oxygen-rich atmosphere from about 2.4 billion years ago.

The study found that the Shark Bay microbe colonies - little different from the 3.5 billion year old samples - consist of hundreds of different species, which perform a range of different tasks that each contribute to the survival of the overall ecosystem. This mutual dependency, according to Dr Brett Neilan, demonstrates that Earth was "already teeming with diverse microbial life", and thus life was evolving at least "many ten of millions of years earlier" than the 3.5 billion year mark.


The announcement was timed to coincide with the launch of the new Centre. How significant is it? On the one hand, "many tens of millions of years" would not seem to add many percentage points to the origin of life. However, it could be said that every bit counts. As I recorded in February, a recent study calculated that there was only about a billion years' worth of viable life left in the planet - before the sun expands to the point Earth becomes uninhabitable.

The chief issue is how contingent - and thus unlikely - the appearance of life is. The further back the origin is pushed, the less contingent life is on chance conditions: the more inevitable it becomes if the circumstances are right - that is (as far as we know it), a star of our sun's size, plus planetary objects of the right size in the right range of distance from the star.

(I have no specific need to tear down idols - they're already down as far as I'm concerned, and life is already here. But it speaks to an increase in the odds of encountering signs of life within a detectable distance from our sparsely populated arm of the galaxy.)

The scientists reporting this study do stress the similarity of the stromatolite formations to those in WA's Pilbara that were dated to 2.5 billion. My first inclination would be to wonder if that necessarily means the Shark Bay colonies are no more evolved than those in the Pilbara. They're the experts, so I'd have to take their word for it. I'd like to know more about those issues, though.
Posted by S Simmonds at 5:01 pm