It could be speculated that if the current oil shock had come about fifteen years earlier - say when Bush senior was waging his war - our global environment would not have such a drastically unhealthy prognosis.

Aside from the effects of maintaining war in Iraq the American way, this incredible rise in oil prices has other roots, particularly in the rapid rate of industrialisation in China (and to a lesser extent India). The irony of timing remains: if a few factors in the course of human history - or planetary composition - were tweaked, we might be switching from fossil fuels before the irrevokable global damage that we are busy causing.* 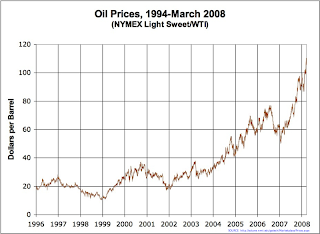 But we're caught unaware. Due to soaring petrol prices, Sydney's seeing a sudden strain to public transport infrastructure, after decades of favouring cars at the expense of rail. In Spain, the government shows signs of bowing to pressure from truck drivers. And despite governments across the world turning around on the issue, the pace of policy change is far too slow to match the urgency of the problem.

Belatedly, this shock has slightly increased the rate at which we are moving away from fossil fuels. But it's not enough, and precious lead time has been lost. Further, despite some arbitrary claims that we have reached a time of "peak oil" (which would deliver its own shocks), in reality the science and the economics is not incontrovertibly there, as it is with climate change. The surge in prices only makes it more lucrative to explore for and extract fossil fuels.

If the stars were in fully fortuitous alignment, we'd experience our current rapid technological spurt first, followed by an oil shock, followed by global warming danger. These factors are strongly intertwining, but the timing is off, and our mettle is being tested so harshly that one might stop to think there were no heavens to guide us. Our leaders are tested, but just as culpably we ourselves, who vote in those leaders and who wait around for others to take action or for governments to legislate to force our hand.

The Iraq-specific factor in the oil shock is temporary. But the galloping industrialisation of China is not.


*When I say our damage to the planet is irrevokable, I mean that the Earth has recovered several times in the past, however recovery doesn't happen on the scale of human history - it's in the millions of years. So this human-caused event is an "in our lifetimes" type situation.
Posted by S Simmonds at 12:26 pm