Sunday 8th June at the Annandale Hotel, headliners were Front End Loader and Spurs For Jesus, two longtime Sydney bands. But the band that really impressed was The Maladies. 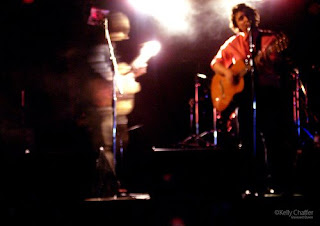 They're a relatively young band. Daniele, the singer/guitarist, told me they'd been in existence for two years, although he'd been playing for five. They have not yet released a CD, although they are recording at the moment.

The music? Very lively, passionate, very rock. Reminds me somewhat of Nick Cave, although there's no way Cave and co would be this energetic. All the musicians were very accomplished. The drummer, who sometimes beat drums with rather unusual sticks, including a maraca at one stage; the singer's delivery was riveting, his voice fluid, and his talent on acoustic guitar good enough to stand out on its own; guitarist and bassist both noticeably skilled, as well as having the musical ideas to make it all interesting and exciting.

They have a MySpace page here. The guitarist, also a Daniel, apparently teaches guitar in Sydney - here. But ignore a website called themaladies.com - that's some US band unfortunately sharing the name.