More than thirty years before I first met my friend Derek, I saw his brother on tv.  It was in 1973 on New Faces, a sort of talent contest, and they came across as something between vaudeville, Noel Coward, and Salvador Dali.  They were called Split Ends, doing the above Sweet Talking Spoon Song.

They didn't do too well.  The clear favourite was the rollicking Bulldogs Allstar Goodtime Band, and their two slices of glorious pop (Miss September and Everyone Knows) each shot up the New Zealand charts rapidly, leaving the Spoon Song literally for dead.

Fast forward seven years.  The Bulldogs lasted little more than a year; Split Enz, as they were now known, were still taking the long, slow road to fame and fortune, and Geoff and Mike Chunn, both having served time in Split Ends (where Mike was known as Jonathan Chunn) were now in Citizen Band, and released a great live album called CB Bootleg.  I already knew them (albeit not their pedigree) from their earlier singles, and earned my respect for a driving, riff-based song called Rust In My Car. 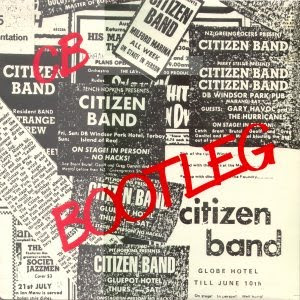 I wore out that album.  They were a great band, with a good repertoire of mostly originals.  It was not so fashionable in 1980, but they really rocked.  And even in their quieter moments, songs such as Acrobats and SOS (no, not the bloody Abba song) were solid, friendly, and tuneful.  The record completed with a strong cover of Graham Parker's Protection, blending well with their sound.

A few decades later, thanks to Derek and his brother, I have for the first time a Citizen Band CD.  And again I find out why that music was simply so enjoyable.

Mike Chunn (who played bass as Jonathan Chunn in Split Ends) was later a music industry exec, and now apparently runs a music mentoring foundation through New Zealand schools.  Geoff Chunn, also in Split Ends, did guitar, vocals, and most songwriting for CB.  Drummer Brent Eccles was in Space Waltz before (as was CB's other guitarist Greg Clark), and subsequently in the Angels.  There's a bio of Citizen Band, and a comprehensive early history of early Split Enz on Sergent's, the most encyclopaedic site there is of 1960s and 70s New Zealand music.  And you can see and hear these original (looking so young!) and unplugged versions of Rust In My Car on YouTube. (Space Waltz' Out On The Streets here.)


A warm appreciation to all those Chunns out there for the CD, and facilitating these memories.