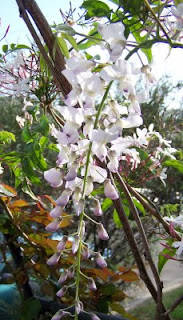 High up on our garden arch, white wisteria is dripping down.

For the last two seasons, the wisteria has been purple. Why is it white this season?

Although wisteria has been in bloom in Sydney for a couple of weeks, ours has only just started - and only on the arch, and not on the main bush. Ours has always bloomed much later than others - perhaps because it's a different variety. But why would a wisteria bush change colour from purple to white?


(Note that in the photo, the wisteria is surrounded by jasmine, which has already been in bloom for maybe a month. This season, it invaded the wisteria - although not to the detriment of the latter - shot past it, and climbed up the arch. If you look carefully in the photo, you might notice some extra long rose creepers, which are about to bloom in a pretty but scentless red.)

Update 10-Oct-09: The rest of the flowers have now come out purple, as mentioned here - thickening the plot.