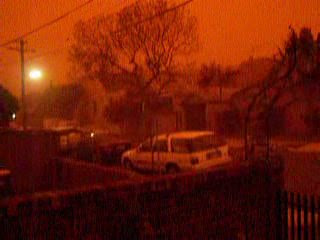 The kids called out to me around 6am this morning to look at the light outside. Everything was orange.


Sydney was in the middle of a dust storm, the likes of which I've never seen in my 20 years here. The dust was exactly the same fine orange dust that my mother-in-law experienced three times per summer in Peak Hill. She hated it. It got into everything, regardless of whether the doors and windows were closed.

However, this particular dust apparently came from "two flooded rivers in western Queensland"  - ie, it was the silt residue after the floods had subsided.  It was estimated that 75,000 tonnes of that dust was carried by the storm; it resulted in the worst air pollution reading on record in Sydney.

Our doors and windows were mostly closed today. But enough dust got in to leave fine traces of orange on interior surfaces. Cars were patterned with a light orange dirt, and several people this morning were walking around with dust masks.

The orange colour had substantially cleared by 8:30, but the dust was still around, and the sky maintained an overcast look until early afternoon. When the dust lifted, the skies were bright blue with fluffy clouds.

At first I thought I'd have problems with asthma (and health warnings abounded), but for those walking the streets this morning, the greater problem was eye irritation. The dust is so fine, it takes a lot to properly clean out the eyes.

The Sydney Morning Herald has press reports and more photos.