Australia: the first Europeans were Portuguese

Peter Trickett, from Canberra, has offered new insight into the European discovery of Australia. Cristóvão de Mendonça, of Portugal first mapped the eastern coast in 1522, well before either the wreck of the dutch ship Batavia and Cook’s expeditions.

The theory is not new, but Trickett has added new weight*, by slicing a reproduced map from the Vallard Atlas to produce a close approximation of the eastern coastline. It seems the Dieppe cartographers (in France) put together two parts of Mendonça’s maps incorrectly – at right angles to the correct placement - hiding for a long time its similarity to the Australian coastline. 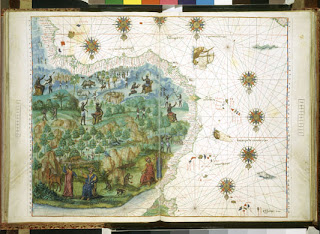 an example from the Vallard Atlas

Mendonça lost one of his ships on the expedition. Correspondingly, there’s tales of a shipwreck in Warnamboo, Victoria – the Mahogany Ship – in the 19th century. It was sighted several times, and the description matched that of Mendonça’s lost ship. However, government expeditions in the 1890s finally failed to find the wreck.

There are two keys that make sense of all this.

First, Portugal had an agreement with Spain on the division of the explorable world, and Mendonça at the time was in Spain’s territory – so the discovery was kept secret. Then, about 1718, a distaster struck Lisbon – earthquake, tsunami, and fire – and all original records were destroyed. Fortunately the Dieppe cartographers had managed to make a copy – but without any useful context left.

“Possibly a bit of skullduggery coverup, as the Brits would not have liked the idea of another colonial power having any claim to any part of this continent.”

It's possible the government expeditions were tasked with hiding the evidence. It's really guesswork. If it were 1800, they might want to hide it, but rationally you'd expect that by 1890 the motivations would be much more archeological than historical. Still, you never can tell how uncivilised a particular government of the day was.