Governments that are climate change laggards (specifically, Australia’s and USA’s) are having an impact far wider than their domestic sphere. They are influencing other governments – such as that carbon emission time bomb, China - into complacency, or at the very least giving them excuses to defer action.

Still, there are some recent examples of leadership to be celebrated:
- The European Union is committing itself to a 20% cut in carbon emissions by 2020;
- The United Kingdom has drafted legislation for a binding commitment to a whopping 60% cut by 2050.

The Europe-wide plan is wider-reaching, but the UK plan is pure leadership – nothing more nor less.

Although they have actually acknowledged this will be quite difficult, it is radical – far more than the Kyoto target of 5%. Arguably, it’s revolutionary.

It is also a minefield.

At least three schools of thought will emerge on this. The first is that, given today’s technology, such a move can only be seen as crippling on the economy. The second is that it will foster the acceleration of new technology in energy generation and conservation. The third is that it is not enough.

There’s clear truth in all those reactions.

It is risky to impose such regulation on a national economy – especially risky to lead the world. It trumps the EU’s commitment: for 2020, the interim requirement is a 26% to 32% reduction by 2020. That is, depending on how reduction ramps up over time.

The problem with such leadership is that it will, in the short term, significantly increase all production costs in the UK, effectively dragging down their economic performance compared to the rest of the world. In turn, that can result in an explosion in imports that will be cheaper than domestic goods, while domestic production crashes. Theoretically, that can render the initiative academic, as domestic economic activity is replaced by unhampered foreign activity.

That is the challenge. It is risky. But at the same time, it can lead to: massive improvements in energy conservation; significant shift to cleaner energy sources; and significant investment in clean technology. From there, they can export to the world.

The initiative could beg the question: why bother? That’s what happened when the BBC did a straw poll in London on March 13th. There was a clear feeling of indifference on the street, with other issues seen as more pressing, and even lingering uncertainty over the veracity of global warming. 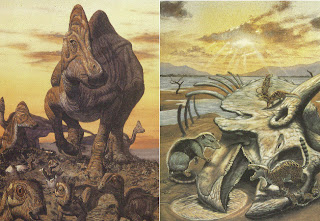 Yes, climate has changed before. In fact, there have been at least five mass extinction events in the lifetime of this planet, the last – and largest - of which wiped out non-avian dinosaurs. But this time it’s anthropogenic, rapid, and comes at great human cost. As the Stern Report said, it will be far cheaper to avoid global warming than to live with it. Who wants a severe reduction in biodiversity, an unmanageable increase in refugees, and a drastically impacted lifestyle, not to mention a thoroughly more hostile environment?

Furthermore, that last mass extinction event left only small creatures (some of which evolved into the mammals of today).

Not to say that this event would necessarily match that. But those survivors were much smaller than us.
Posted by S Simmonds at 5:51 pm