Firefly is a hidden gem. A tv series that was either unceremoniously cancelled (US) or run in a nighttime oblivion (Australia).

Why? A bit hard for tv execs to categorise, maybe. Being a peculiar blend of science fiction and western.

It may be a bit low-budget for a typical sci fi series, but for my money it worked particularly well – despite its potential for being treated as Yet Another Space Opera. But the writing and the acting were at best outstanding, and at worst, quite watchable. In fact, I can’t think of another SF programme I’d prefer to watch. It had the advantage of Josh Whedon on the helm, who was undoubtedly responsible for much of the cleverness. His previous projects had included Buffy (a peculiar blend of vampire and high school genres) and Angel (a peculiar blend of vampire and detective).

Whedon’s hand resulted in a series with the level of engagement of a serial, but with each episode self-sufficient. The milieu is, as a whole, quite engrossing, the flourishes are impressive - even little ones, like the accurate silence of the ship travelling through space- and the captain’s role is especially well-acted (by Nathan Fillion – watch out for him) and well-written. 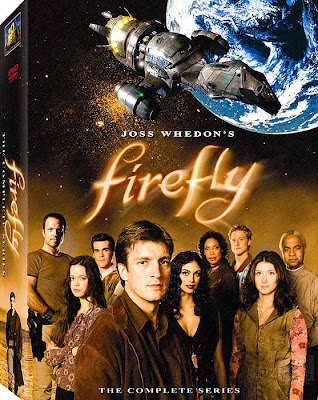 Looking at the chat on the web, I found the feedback was about 80 – 90% gushing, and about 10% fully disparaging. Frequent complaints were the exact opposite of the praise – around the acting and writing. Looking more carefully, there are some people who are largely space-fillers, and the occasional treadmill dialogue. But the plotting overall is high quality, and the dialogue - and delivery - is often sheer poetry.

I’m not looking forward to finishing it. A mark of its success is the subsequent film Serenity – which I saw first, yet it’s the (likely) conclusion to the series. On the one hand it stood alone quite strongly; on the other hand it’s an excellent finale.