What TV will be

We should seriously expect to see a merger between tv and internet.

You will have simply an internet-enabled television and a remote control. Rather than selecting a channel, you will access a web page that will act as a channel. These pages will link to either content or other pages. Content will be television quality (High Definition, by then). 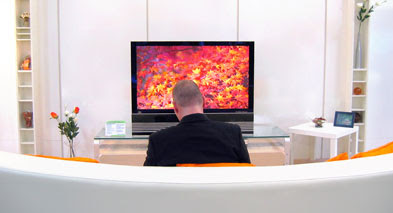 There will also be new paradigms to redefine the televisual experience These will provide a blend of the passivity of tv-watching with the flexibility of web browsing. This might be, for example, some sort of hybrid of the three paradigms of tv channels, web pages and DVD selection menus. You might also find methods of choice that involve: programming ahead, linking (shorter) content, and generating targeted random programming based on selected criteria.


There’s a lot of reasons we’re not there yet, but just as many reasons that we will eventually get to that point.

The overriding driver is that people – as a broad mass – want that combination of passive spectatorship but greater choice, and greater access to content.


We’re seeing a few baby steps towards this.

Microsoft, for example, has tried it with its Windows Media Center (sic), but it’s going to remain a halfbaked toy while hardware, web sites, and viewing patterns remain unchanged.

In fact, many people are already presenting internet tv as a fait accompli, but they mostly tend to be varieties of watching tv on the internet, whereas the endgame will be watching the internet on tv.

Of course, the clearest barrier to this is that broadcast is broadcast, whereas datacasting is directed to a single receiver. The bandwidth demands would be absolutely crippling with current technology.

Babelgum is a product that has tried to solve this. It’s a variety of P2PTV – peer-to-peer tv, where each user, while downloading, also uploads to other users. This is still unsatisfactory, as the bandwidth demands remain mighty. The solution may or may not be down this path.

The net has flexibility, and some rudimentary televisual content (few people watch tv-length video streamed from the web). Television has full-length content and broadcast reach, but rudimentary flexibility. It is only a matter of time before the technology is solved. Watch for the blur in the space between the tv and the computer.
Posted by S Simmonds at 5:40 pm