Dregs of the NSW State election

It's not been particularly edifying trying to draw conclusions from the results of the NSW election. It was a tawdry affair by anyone’s book, and all the spinning doesn’t hide anything. 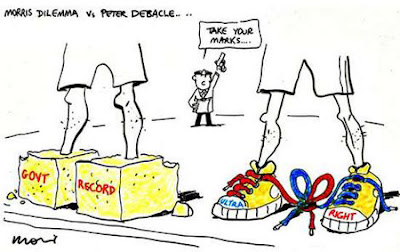 a) Everyone's suddenly saying the government was hopeless; it deserved to die. However, when Bob Carr suddenly stepped down as Premier 18 months ago, there was no chorus of “thank goodness he's gone, he was a blight on the State”. There was surprisingly little dissent on his ten years as premier. Was he a spinmaster? Did he leave a rotting legacy that was bound to surface shortly? Were there a bunch of crises in the past 18 months? Or is everyone finding it so easy to criticise Morris Iemma because he's so colourless?
Possibly a combination of all the above.

b) Mixed signals on whether the Greens were winners. True, they increased their upper house seats to four, and primary vote was strong – 20%, by some reckoning. But there was surprisingly little increase in their vote, given the high prominence afforded to environmental issues (read: climate change) over the past year. However, a recent poll may answer this one: effectively, everyone's concerned, but nobody wants to do anything.

c) What does it mean for November's Federal election? Certainly the Howard government's industrial relations legislation was abhorred enough that it was a factor in the State election, despite it being specifically a federal issue. I doubt Howard will resign or get forced out of office by his own party – they're too wimpy. Yet Howard will do several things between now and the election to appease all those up in arms. Preferably a little something for everyone, as he has done before. Expect:
- Howard to force the US to free David Hicks at the last possible moment (if he isn’t already out of Guantanamo by then);
- a minor rollback of some of the worst excesses of the industrial relations legislation;
- and the only tricks the Liberals have left: attack the Opposition leader mercilessly; and throw around a whole bunch of bribes. Hey, it worked before.

One ominous development that will increase the ugliness of the Federal election: attack ads. They’ve been here before, but apparently they’ve turned several shades more vicious. As the saying goes, nobody likes them, but they work.
Posted by S Simmonds at 5:58 pm