Snape: whose side are you on?

Reading around on the internet, I see this question is a subject of much more debate than I expected.

When I read in The Half-Blood Prince that Severus Snape made an unbreakable vow to help and protect Draco Malfoy, I figured it was a ploy. But by the time I got to the end of the book, I’d changed my mind. 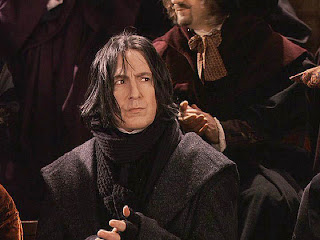 Now I’ve come full circle, and my reckoning is that there is still a lot of mileage in him.

JK Rowling has said that Snape is a “gift” of a character. I take this to mean his is a deeper well to draw from than most.

Compare The Half-Blood Prince with the first in the series: Philosopher's Stone was obviously aimed at younger readers, and although it showed much imagination and complexity, it was not very subtle. Rowling’s writing is now undeniably more subtle, more complex, and evidently framed with an eye on the older reader. Although it remains a mixed bag for either audience, it is generally quite a pleasure to read: not a challenge, of course, but usually quite engaging. Darker, deeper, and longer.

By this point - and despite Snape's heinous deed - I have concluded that it would be far too simple for Snape to remain on the side of evil, and the Harry Potter books have become richer than that.


I also note that there are a couple of books on the internet that dare to speculate what will happen in the new book, Deathly Hallows.

I'm doing what I usually do. Re-reading the previous book just before the new one comes out. After I've read the new book, I might find the speculative books worth a read, simply as an "alternate universe", what might have been and wasn't. Mugglenet.Com's What Will Happen in Harry Potter 7 has the highest recommendation, and is in the bookshops in Australia. Also possibly worth a look: The End of Harry Potter? by David Langford.

Rowling said Half-Blood Prince and Deathly Hallows were very much companion books. Time to sit back and enjoy the ride.
Posted by S Simmonds at 11:23 pm