John Huston looms large in the Hollywood pantheon. His career was lengthy, his films were epic.

In a Huston retrospective at the Sydney Film Festival, features included African Queen, Maltese Falcon, and The Man Who Would Be King.

So it was a surprise to see Wise Blood, from the twilight of his career. Small in scope, low-budget in feel, it is quite a prickly film populated by lost souls that are not especially likeable. 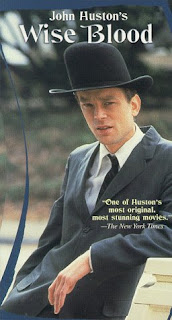 Wikipedia has a good synopsis of the eponymous source novel by a Ms Flannery O'Conner, and the film seems to follow it faithfully most of the way. In brief: a young war veteran, Hazel Motes, returns to the US South [it's filmed in Macon, Georgia]. He has a lot of tension inside him, as befits a preacher-type who doesn't believe. His non-belief is like a crown of thorns for him, as he was subjected by his hellfire preacher grandfather to the guilt of the unsaved, yet still he disbelieves. He encounters various characters who can sway him from neither his denials nor the vehemence of his delivery.

He does indeed suit the putative church of Christ without Christ. He has a preacher manner and happens to dress like a preacher. His self-imposed penance includes putting stones in his boots. He eventually blinds himself, in echo of the shyster preacher [Harry Dean Stanton] who doesn't believe either, but is less fervent about it, and so has feigned his own blindness.

As ever, Stanton plays his role with ease and credibility. But the bravura performance comes from Brad Dourif as the protagonist. Surprisingly, it doesn't seem to have delivered him a career except as a character actor. He can also be seen hiding under the makeup of his other notable role, Wormtongue in the Lord Of The Rings trilogy.

A troubling film about a troubled person. It hangs around in my mind, I have no choice. Is that the mark of a good film?