Walkin' alone, drinkin' alone,
Ridin' slow, parked outside your home.
Sleeping just like everybody else.
There with no grace of god you go,
through the United States of Warren Oates.


Ahh, the Soft 'n' Sexy Sound of Dave Graney... well, in this case, one of his rockers, and a good one that I haven't been able to get out of my mind recently. 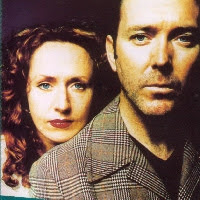 You might think that Google can turn up anything if you give it the chance. Put in a few consective words that quote, well anything... and if it's there, it will turn up. I do this a fair bit as a shortcut to details of what I'm after.

Now I'm not so sure.

Take the Dave Graney song above, The United States Of Warren Oates. Do a search on "200 miles of country road": 2 results - the correct answer, to my knowledge.

So the way Google indexes is not even. I suspect it breaks things up into phrases - for the less popular sites only - and only stores the phrases, not the full set of words. However, for the more popular sites, it indexes the lot.

Just something to watch out for. Try to quote a whole phrase, not two different but consecutive bits.


...A lead singer in a rock 'n' roll band,
you're poor,
you're stoned,
you're a slave to an unnameable half-forgotten ambition,
you're just another guy on the lost highway
a ramblin' man,
a pirate of love,
rider on the range,
a seventh son of a seventh son,
a love rustler,
a desperado,
a bastard right royal historically entitled to be bad,
the man in black
john da conkeroo
the world's forgotten boy
meat man,
mr blues,
the velvet fog,
the silver fox,
the little cloud that cried,
the best dressed chicken in town...


(Rock'n'Roll Is Where I Hide)

Now that's funny. I was just listening to Dave Graney on my work computer and asking myself WTF is he singing about Warren Oates for? (I only know him as Sgt Hulka).

So I did a search on google. Found nothing but this post - about someone who had the same problem, and found... not much really.

I never tire of the whacked out lyrics to Rock'n'Roll is where I hide.