Sometimes it feels like the more I read about evolution, the less I understand. It’s probably like that for most disciplines, especially if study is not sufficiently systematic.

Certainly, the popular understanding of evolution is rudimentary, and often rather off the mark.

The bloke who writes the Dilbert cartoons, Scott Adams, is certainly no fool. However, intelligence is no substitute for knowledge or understanding, and it certainly doesn’t guarantee humility. A recent blog entry of his complains quite loudly that the “average non-scientist has been fed a diet of suspicious evidence for evolution for decades”.

I don’t have a strong argument with that. He complains that the average punter is fed too many simplifications that don’t always stack up. True. Especially via the media and popular culture. It applies to most science, but few others have such profound nuance for people’s psyche. Witness the number of evolution blogs out there – that are mostly focused on defending it against creationism or other anti-science. Sciences inherently involve deep understanding and knowledge – and disagreements among experts. It is impossible to convey all this to the untrained mind without simplifying both the explanations and the debates.

And revisions in evolutionary biology are particularly common compared with other sciences. We’re talking major revisions. Simply, the number of fossils used to draw conclusions about human evolution is surprisingly small, and any new specimen can require textbook revisions. Not to mention the perpetual debates between experts, who can’t agree on taxonomies or narratives.

Let’s start from the beginning.

Evolution is about random changes in DNA, the blueprints for species, between generations. The outcome of those changes depends on the environment. Either the change is better suited to the environment, so the changed genes dominate over time, or the change does not confer advantages over the existing population, in which case they don’t thrive. The changes can result in populations spreading over different environmental niches. Who survives?
a) the best-suited populations in each niche;
b) whoever survives environmental changes (either gradual or cataclysmic) 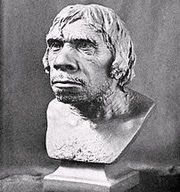 I think that covers the simplest introduction. This does not necessarily speak to increasing complexity at all. There have been plenty of dead ends in history – due to environment rather than inferior makeup. Neandertals, for example, had larger brain capacities than us (which is not to say more complex), but that gives no indication of superior survival capacity over our ancestors – larger brains need more nutrition, for example, and so may be less suited to resource-poor environments.

More complexity to come.
Posted by S Simmonds at 5:25 pm

Email ThisBlogThis!Share to TwitterShare to FacebookShare to Pinterest
Labels: Evolution