I mentioned just a few days ago two Pavarotti pieces in an arbitrary list of beautiful music.


Miss Sarajevo: In the middle of a U2 song, Pavarotti turns up to send the song soaring. Pavarotti boosts a minor wistful mood into the stratosphere.

No, Pagliacci non son: Leoncavallo's opera Pagliacci sees Pavarotti's titular character in a climax of anguish over betrayal. The passage from 2:21 to 2:31 always gives me shivers as he renounces his love in agony. 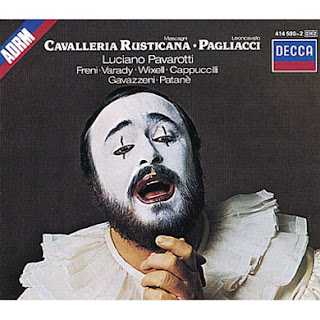 The recording is London 414 590-2, with Patane and the National Philharmonic Orchestra.

From time to time I've searched for more of these peaks from Pavarotti, but haven't hit it lucky. The recording I have of Nessun Dorma ends on a weak note. I also asked at a music shop for a recommended recording, and ended up with his CD "King of the High Cs", which doesn't have any strong moments for me. Other recommendations most welcome.

Good music is pure passion; it's not the province only of operatic moments, but there are certainly masses of examples in this milieu. Pavarotti had a particular style, as had his colleague tenors Domingo and Carerras in different ways. Domingo had a marvellous clarity and strength; Carreras didn't - but he had character, and so could do a Zarzuela tune like No Puedo Ser with a flair unmatched.


Although past his peak by a decade or two, Pavarotti showed flair throughout his career, and left a legacy to be cherished.
Posted by S Simmonds at 10:03 am