After a phony election campaign all year, the wave of opinion polls has been rolling consistently all year, to dump the Liberals bruised and humiliated on the shores of September with nothing between them and oblivion bar the few short weeks of delay that they can claw out of what remains of the year.

John Howard is a venal, heartless, grubby little man with a small soul, whom history will remember most unkindly whenever it's sadly obliged to recall him at all.


Disappointingly, the year and the time and tide have been carrying us to this point for all the wrong reasons. Debate focused on materialism rather than the size of the soul. In a less metaphysical sense, retiring MP Carmen Lawrence gave a particularly lucid explanation for the things that do matter – the real agenda. Well worth a read of her summation. 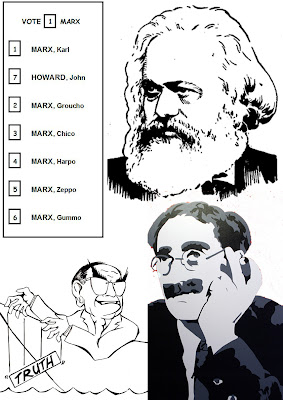 The actual reasons for the switch are much more mundane. The Australian electorate, at the outcome-deciding margins, has little political consciousness beyond the man at the top, and finds the issues too confusing to be able to add together the apples and oranges of policy to understand what ideology means, and what impact it has on their very lives.

John Howard is a petty man whose biggest single ambition is to be Prime Minister, and to stay Prime Minister. It's been shown that even in the face of political suicide, he can't let go, and he'll undermine his own ostensible commitment to helping the Liberals assess their situation with honesty, openness and fortitude. Those traits are not so much anathema to him, but a foreign country.

Fortunately. Because what sliver of a chance the Liberals do have lies in getting rid of Howard – and he won't let it happen and they won't do it. If Costello was not just given the reins, but seized them, he would instantly improve his stocks with the electorate. And although his popularity is not high, his ability is sufficient to be able to use those last few weeks to instil himself on the public consciousness – positively. Fortunately, that cossetted claque of Liberal MPs is oscillating wildly between acting the headless chooks and staring like rabbits at headlights.

In such a maelstrom, anything can happen. And once the battle is over and the wounded set about deepening each others' wounds, that Anything will be the Liberals' ultimate poison: choosing Malcolm Turnbull to be their leader. He's a nightmare of a politician: ostensibly smart and capable, but a man of such blithe arrogance that his presence alone will add another term to the Liberals' electoral wilderness hell.

And, for what they've done to Australia, it's what John Howard and the Liberals deserve.