Relativity and our planetary neighbours

I just had to show this picture. It clarifies beautifully the relative dimensions of Mercury, Venus, Earth, and Mars. Bet you didn't realise Mars was so much smaller than Venus.
Mercury is about 0.055 times the Earth's mass. The moon is about 0.01 times. That much smaller.

While we're here: today's paper reported the conclusion of some scientists on the meteor that caused the mass extinction of dinosaurs 65 million years ago. They reckon it was the result of a collision between two very large asteroids in the Asteroid Belt, and that the same collision spewed debris across the moon and Mars at around the same time. 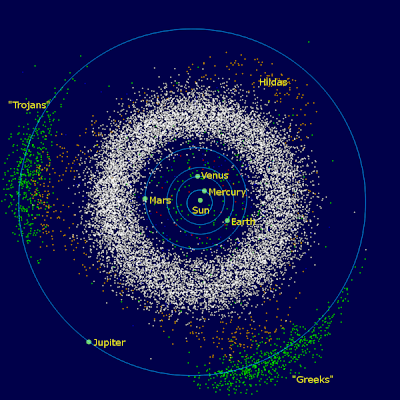 More plausible than a random event originating outside the solar system. We are, after all, on an outer arm of our galaxy, not terribly close to much else.

Email ThisBlogThis!Share to TwitterShare to FacebookShare to Pinterest
Labels: astrophysics