The Inquisition's here to stay.

We've been having a phoney election campaign all year, and it's been excruciating. Yet it's a pale shadow of the pain we have yet to face. By comparison, the Spanish Inquisition is but a blink of the eye.
It might sound like I'm enjoying the election campaign. But I'm not. I have absolutely no desire to see any politician, nor hear anything they have to say. And the goat entrails tend to suggest that most people made up their minds at least six months ago, and that the millions of dollars of raw tedium still to be inflicted on us will not be enough to sway a single whoop whoop marginal. Pollsters keep varying their questions in the hope of deeper insights, but there's really nothing to add to the story. People have simply stopped listening to the Liberals, and are going to vote for the ALP without turning the hearing aid a single notch.
The latest whisper is that the election will be announced on the 14th of October, for the 27th of November. That makes nearly three more weeks of pretend campaigning before we even begin.
Still, I don't mind some of the mumbo jumbo on the periphery. It's what the commentators have to say that stirs the pot. Such as "Malcolm Turnbull refuses to rule out challenging for the leadership". Good on him. If ever there was a single person to take responsibility for an extra three years in the political wilderness... more, if the Liberals don't wise up to him quickly enough.
All the columnists whose blatherings couldn't hold attention for more than a sentence: they're suddenly making stern points about the world post election, and the sins to be visited on us all because we will insist on voting ALP.
Well, some of us. So to speak. For me, it's the closest call yet: I'd dearly love to vote for Peter Garrett. But there's principle involved - even higher than him.

And then we get Miranda Devine's excoriation of Malcolm Turnbull. She's seen the future of the Liberal Party, and she's getting bitter and nasty in advance. Let her. Nobody's listening.
Come next year, we'll all wonder why we put up with it in the first place. we'd vote to eliminate the campaign period altogether - have a few weeks of meditative calm before we do the inevitable. But that won't happen: policy is decided by politicians, and we're just along for the ride. 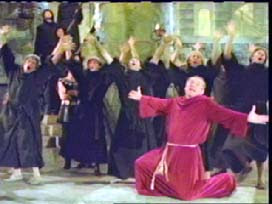 The Inquisition, what a show
The Inquistion, here we go
We know you're
wishin' that we'd go away.
But the Inquisition's here and it's here to stay!