Some new analysis of last year's federal election has given some interesting insights into the reasons for the change of government.

A team from ANU (Australian National University) conducted the Australian Election Study, reckoned by the Herald to be the most definitive exit poll, and one that seems to have been conducted for some years. It was a postal survey of 1873 voters.

Voter decisions are based on a rather disparate set of reasons, most of which to my mind are far more about bread and circuses than fundamental values or ethics. Sometimes on issues of the day, but like interest rates, they are often issues for which there's little difference between the two sides. Often, too, there is is too much presidential emphasis on the personality of the leaders, which doesn't per se speak to the basic value differences between the ALP and the Coalition. All this seems to result in rather an amount of cognitive dissonance, not just for the aggregate of voters, but for individuals.

Here's some of the findings.

Global Warming
This was the second-biggest issue. 67% of voters wanted the Kyoto protocol ratified (ALP policy); 8% said no (Coalition policy), while the remainder had some ambivalence. Of those supporting ratification, 30% voted for the Coalition.

Interest Rates
This is an issue for which effective difference between the two sides has eroded over time, as ALP policy has become more economically rationalist, and interest rates are now independently set purely on the basis of their effect on inflation. There remains a marginal difference between the two - the ALP's social justice bent would result in slightly higher rates - but this is not something that most voters could tell if it were possible to subject them to a double blind test. For this reason, where half of the electorate was concerned about interest rates, 47% of those voted ALP, while 42% voted Coalition - simply an attack on the incumbent's record of rate rises. 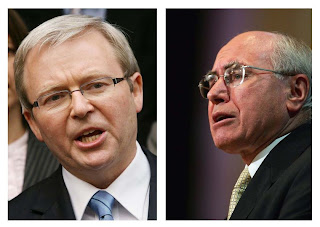 Prime Ministers present and past

Leadership
Support for Howard was quite divided, with 49% liking him and 41% disliking him. Rudd had 63% approval, with a nett approval rating of 43 points, compared with Howard's eight points. Rudd's rating was the highest in the 20 years of the survey; Howard's rating was his personal lowest in that time. By contrast, Costello's nett rating was -18, which might suggest a late change in leadership would not have made any difference. However there was no indication how much of a vote-changer this point was. On the other hand, when Keating lost the 1996 election, his nett approval was -15, not as bad as Costello's.

The Election Campaign
The Coalition opted for an extended campaign, which seems to be somewhat typical for a government on its way out. Yet 70% of the electorate had already decided before the campaign; those who made up their mind in the heat of the campaign were pretty evenly split.

Battlers
In 1996, John Howard made a perverse - and successful - pitch for the "battlers", effectively those less-well-off workers. This time around, 51% of unskilled and semi-skilled workers voted for the ALP, and 37% for the Coalition, effectively the reverse of 1996's result. If you roll in One Nation's temporary electoral success, the "battler" vote had stayed fairly consistently with the Coalition over their four election victories - until this time around. It's plausible that these voters were more convinced by the ACTU's "Your Rights At Work" campaign over the year leading up to the election, rather than the Coalition's scare ads about "union heavies" in the workplace and "union bosses" in the ALP front bench. It was, after all, rather brash of the Coalition to try to tell these people what was happening in their own workplace.
Posted by S Simmonds at 2:53 pm