Evolution: Crocodilians, and clarity of terminology

What is a crocodilian? This came up in one of my kids' home readers - little books that five to eight year olds practice on each night.

You might intuitively suggest crocodilians are the group comprising crocodiles and alligators - fair enough. You might add caimans/caymans and, if you were really knowledgeable, gharials. 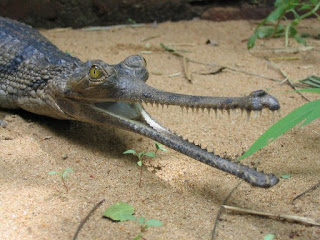 Gharial: the lesser-known crocodilian
But from here, we come to a point that is somewhat illustrative of a certain lack of clarity in the common usage of terms. Catalogues, descriptions, narratives of animals frequently refer implicitly to extant species, but are silent on extinct ones. Thus a narrative may be wholly accurate in a current context, but misleading if evolutionary groupings are considered.

This is particularly true in the case of mammals. Most living mammals are, of course, placentals (eutherians, more properly). Some are marsupials (metatherians, which can also be considered placental), and a few are monotremes (non-therians, less correctly prototherians, taking in the platypus and echidna species). Metatherians are placental, but give birth to partly-developed young, while monotremes are egg-layers. But are non-therians exclusively egg-layers? There is divergence even in scientific material. This for another post.

Crocodilians are, correctly, an order of tetrapods in the class Sauropsida (reptiles) - they are the closest living relatives to birds. There is an applicable superorder: Crocodylomorpha.

To its credit, the aforementioned book Crocodilians also enumerated a few extinct species. To wit, Orthosuchus, Terrestrisuchus, and Desmatosuchus. I looked up those three species. They're all from the late Triassic; all united in the Sauropsida class. However, the first two belong to the Crocodylomorpha, while the latter is a bizarre armoured, vegetarian species of the order Aetosauria. According to both Paleos and Wikipedia, on current phylogeny this is a only a sister clade to the Crocodylomorpha.

Interestingly, Paleos and Wikipedia agree on this, but disagree on how they are organised: see Paleos on Suchia and Wikipedia on Crurotarsi. Without tracking all the sources, I'd sooner trust Paleos, although in this case Wikipedia actually gives direct sources for that cladogram. Sometimes such differences are due to different sources that are in disagreement; sometimes they're due to one of the two being updated more recently. To Wikipedia's discredit, the piecemeal nature of its updating structure often leaves details between articles in disagreement.

the now-orphaned Desmatosuchus
So, as I suspected the herbivore Desmatosuchus didn't really belong in that book aimed at children. Pity, because the writers did make an effort. It's possible thinking had changed since it was published, however, the only detail I now have is the book's name.

Incidentally, my 1988 Britannica is silent on crocodilians - at least at the index level.
Posted by S Simmonds at 10:04 am