Evolution: sex scandal: how rotifers get away without it - more questions than answers

Richard Dawkins discusses the scandal of sex in his book The Ancestor's Tale.

Dawkins originates the concept with John Maynard Smith: that sex itself is an evolutionary scandal. At its simplest, one would expect that sexual reproduction is counterintuitive in a theoretical sense. In an evolutionary context, it is in the individual's best interests to pass on as many genes as possible, yet sexual reproduction requires a halving of the amount of genetic information passed on.

It would make sense if there was some value in sharing the load of passing on genes, such that genetic survival was enhanced if the two parents worked together.

Yet it has been found fairly consistently that the male does much less work - so the workload is not shared to the benefit of the genes.

That is one scandal. The other could be characterised as a scandal within a scandal (Dawkins: a paradox within a paradox). That is, the bdelloid rotifer. 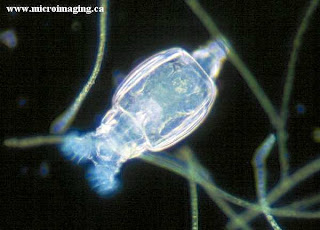 Rotifers are tiny marine organisms (as are many odd creatures). Although many animals have asexual reproduction within a broader repertoire, bdelloid rotifers consistently reproduce without sex. That is, as far as their natural history can be traced - at least 40 million years - there has never been any evidence of two sexes (effectively classifying them as female, and eliminating the concept of a male).

Intuitively, I would expect sexual reproduction to make sense: halving the genetic information passed on would stabilise a population that experiences constant random mutation - as all species do*. This because most mutations are harmful to individual and species survival, but constant melding of genes can spread the load and weed out the unviable outliers.

So bdelloids are a scandal: how can they consistently reproduce, without succumbing to gradual genetic (and thus individual and species) degradation into unviability?

A recent study (reported here) has gone some of the way to unravelling the mystery. In the journal Science, Harvard scientists reported (abstract here) that bdelloids "steal" (absorb) genetic material from a whole host of other organisms. Not just animals: they also found genes from bacteria, fungi and plants. They have "relaxed the barriers to the incorporation of foreign genetic material".

This definitely gives some answers, but opens up many more questions. Including:
1) how do they stabilise as a species despite the absorption of foreign genes?
2) how do they "resist radiation" that affects the genetic information?
3) how does this tie in with the understanding that complex multicellular life developed through the unification of genetic material from diverse basal organisms?


I suspect that these three questions are wrapped up in each other, and I believe this is a highly significant find. I get the feeling we're on the verge of a more comprehensive understanding of how evolution (via genetic information) works.


*What causes mutation? Intuition again tells me this is directly due to radiation, probably mainly solar, which is otherwise beneficial - and still is, I contend. But this is a whole other story.

Here is an article that explains, from an information-theorist's point of view, why there is no paradox at all with sexual reproduction. As with most of the supposed "paradoxes" with evolution, you simply have to adopt the right viewpoint to see that natural selection is in fact working as expected.

That's a lot to absorb, and I should read it properly before responding at length. So far, it sounds like we agree that sexual reproduction aids error-correction.

I appreciate the reference to your work, and will endeavour to take it all in.