There's a lot bands (and specific albums) I feel like commenting on from time to time. But this comes with a certain topicality, given Ron Peno's appearance on (a repeated) RockWiz last night.

So I dusted off my Died Pretty best-of for a listen. So criminally ignored is the band that I suspect even I have not listened through the full CD more than a handful of times.

A guitar-oriented rock band with a touch of the psychadelic - not a bad thing in context - Died Pretty's heyday was in the late 80s and early 90s, a time when I was getting my maximum fill of live bands in Sydney. 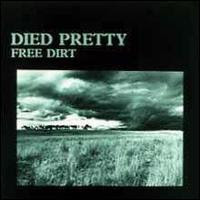 Although I saw them a number of times, the only memory I can specifically place is a time or two I saw them at the Harold Park Hotel. They had a good reputation (which counted for something), but moreover, they were an exciting rock band: definitely a cut above the normal fare for Sydney bands, but never quite breaking out consistently enough to have unmitigated commercial success or fame.

On stage, Ron Peno always struck me - unfairly, I guess - as wishing he was Jim Morrison. His noticeably short stature was rather un-rock-god-like, however, but his very long black hair added an unexpected oomph to his writhing delivery. Peno and particularly guitarist Brett Myers unquestionably provided the guts of what made Died Pretty great to appreciate and listen to.

A little after this time - mid-90s album Doughboy Hollow - saw the nearest they got to commercial success, but it still wasn't enough, and they faded and broke up. And Peno turned up on RockWiz, singing DC with a decidedly short crop that was inevitably colour-faded and thinning. Still, he came across as a particularly pleasant guest, with a voice that stood out as rather better trained than most rock singers.

Recommended: Blue Sky Day, Everybody Moves, and Sweetheart. Also, a lengthy track called Desparate Hours, which I did not remember from the time, but which opens Out Of The Unknown (The very best of...) with great strength. Still to explore the bonus CD, which includes a cover of Ed Keupper's Eternally Yours.

Great when you're looking for a decent dose of rock that hasn't gone stale.
Posted by S Simmonds at 11:21 am