Paul Budde's BuddeCom is an Australian organisation that analyses telecommunications markets around the world. He was presenting again at CeBIT this year, and was very worthwhile to listen to, as always. His themes are usually around competition and the legislative environment, and so inevitably he rails against the current Australian regulatory regime, as well as Telstra's special position in dominating the market.
The following are some notes I took from one of his presentations. Many of the figures quoted derive from his organisation's own research, which carries sufficient gravitas for the US government to renew its contract to buy all of BuddeCom's annual cycle of reports - and those reports are many and come with a hefty price tag. 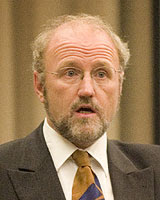 The Australian telecommunications market is still growing, however the rate of growth is dropping (in dollar terms) as it moves from a voice- to a data-based paradigm.
Telstra still has about 65% of the market (70% of the wholesale market), but that share will continue to decline. (Budde noted that growth in the wholesale market was rather stagnant in Australia compared to more mature markets such as the European Union.) The total market grew by 5.2% to $AU36.6b over the last year.
Into the future, he sees an additional channel for telecommunications, including broadband, being via the electricity distribution network. (This is not out of keeping with Optus' prognostications - a year ago, I heard their chief technologist saying something similar.)
He also sees health-related applications - eg diagnosis) becoming a significant part of internet- based traffic - as much as 25%.
Mobile phone penetration has pretty much reached saturation: to 110% of the Australian population, indicating a noticeable number of people appear to have more than one active phone. The Average Revenue Per Unit (ARPU) has stabilised to $46.70 (presumably per month). This will not change significantly due to 3G services - which will reach 8m (45% of the population) by the end of the year - because further market penetration of 3G is hampered by price. And so price drops will have to accompany increased market takeup. Budde commented that the growth in 3G content was handicapped by the great reluctance of existing players to open up their network to third-party content providers.
Budde noted that one of the most profitable mobile operators in the world - India's Bharti () - has very low charges at about $5 per year plus 1c/minute call charges.
He also stated mobile market penetration in Africa - the poorest continent in the world - was at 60%! In fact, he told me later that the actual figure arrived at by his analyst was 80%, but this was based on government figures which he didn't trust, so he discounted it to 60%. Two comments he made to me that help explain this are that a) this was not uniform, and there were quite dramatic differences in takeup between different countries; b) the figure was based on mobile servives - which often amounted to simply a sim card, which owners might take to someone local to rent a phone to make the actual call; c) trelecommunications in Africa is a significant economic tool, and mobile infrastructure may be present even when more fundamental infrastructure such as roads was poor. I suggested it also reflected the fact that mobile infrastructure is often quicker and easier to put in place than fixed lines; Budde didn't disagree with this, of course.
Budde expects the number of broadband services in Australia to go from 4.5m to 5.5m by 2009. An ongoing message of his has been that much of what we call broadband in Australia is actually internet connection at relatively low speeds of 1 MPS or less. However, increased takeup again hits affordability issues, and he felt there was a fair way to go, by international standards. He reckoned it would take a price drop to $39 per month to get takeup up to 80%. Broadband costs _are_ falling, but they're still quite high by international standards.
He expected the telecomms boom to continue to at least 2015, with data overtaking mobile services as the key driver of growth. 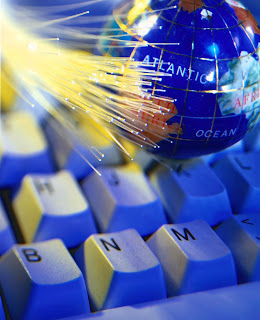 Budde also made a point that a gradual drift away from tv- watching is leading to an 'unleashing of minds'. That is, passive entertainment is giving way to passing time in a more self-governing, engaging form of passing time. He mentioned, as an example of this, Wikipedia, which he said represented 100,000 hours of human labour.
I'm not sure about that last figure (I would have thought the number was much higher), but I'm inclined to take issue with Budde's more general point.
It is true, there has been a marked drift away from television, which has the networks worried. And in parallel there has been an increase in the amount of 'viewer' time that has been absorbed by the internet. However, television as a passive medium is likely to be just the ticket for a large number of people, at the end of a day. The drift to net-based entertainment may currently be taking place amongst those people who are less inclined to settle for passive entertainment, and there may be a limiting boundary to that drift of audience. Moreover, it's possible that an admixture of the two may come to dominate (albeit not exclusively) our collective attention. That is, internet-based delivery of passive channels, such as we see with broadcast tv, but with far greater choice of viewing material. And there will always be those who will be happy to do what is easiest of all: turn on an appliance (whatever it becomes), sit back, and watch.
Posted by S Simmonds at 4:16 pm