Dicynodont fossil find is evidence of... what?

How meaningful were media reports (eg  in the UK Telegraph, The Age) in December of a dicynodont fossil find in Tasmania?
The find, dated back to about 250 million years ago, was reported in the Journal of Vertebrate Paleontology, but interested-party scientists and media have a strong interest in making the information a story.  Thus overlaying a slant and significance that the lay person cannot easily navigate. 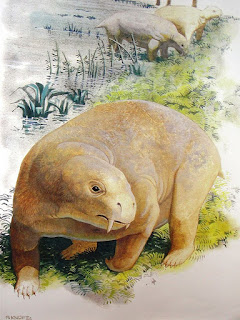 Dicynodonts (I’m told it’s pronounced dee-, not die-, which does not sound palatable to me, but that probably shows what an amateur I am) were widespread both before and after the great Permian extinction 245 million years ago (which marks the start of the Mesozoic era, typified as the “age of the dinosaurs”).  That event wiped out 80% of animal species and is still subject to debate over cause, although volcanic activity is a popular explanation.

But these animals survived.  They’re not just a single species really, but an infraorder: a group of species one below a class (such as mammals).  They were herbivores, ranging from small to cow-size, the “most successful and abundant land vertebrates of the late Permian” period, according to Wikipedia.
And after an extinction such as the Permian, the various environments are largely depopulated, and ripe for expansion by any species that can survive.  And in fact, after the Permian, a single subset of the dicynodont – the lystrosaurus genus, comprising about five species – truly proliferated throughout the world.  However, the world at the time of the lystrosaurus – and the dicynodont found in Tasmania – was very different – it was one big continent, referred to as Pangea.  Spreading wide would not be a problem at that time – if a species was suitably adaptive to the environment.
So the Tasmania find was not even narrowed down to a species, and it’s not surprising to find it in Tasmania, which was part of Australia until recently, and thus part of Pangea.
In fact, another dicynodont fossil had previously been found in Australia - announced in 2003, after re-examination of a fossil held for decades in Queensland Museum.
Dicynodonts are part of a wider grouping of animals called therapsids, of which only mammals remain.  Yes, all dicynodonts and descendants eventually became extinct.
And despite one of the interested-party scientists (Andrew Rozefelds) saying that the find “fills an important gap in our knowledge of these mammal-like reptiles and where they lived”, I’m still struggling to find what gap it fills.  It’s not to be found in the media.  Alas, access to the Journal of Vertebrate Paleontology is by subscription only.  Maybe if I get to a university library sometime…
References
ABC Science: Ozfossils
Tudge, Colin (2000): The Variety of Life, OUP
Wikipedia: including dicynodont, lystrosaurus, therapsid, permian
Posted by S Simmonds at 2:53 pm