Coming from a scientific disposition, I have a scientist's rapacious desire for The Truth.


That's the beauty of science.  We get closer to Truth all the time - and the mis-steps and side alleys are far fewer and less significant than the ascientific (as are many climate change deniers) would have us believe.  Mostly, refinements are built upon refinements, and previous truths are hardly ever gainsaid - at least not significantly.  Quantum and Einsteinian physics don't negate the reality and applicability of Newtonian physics on an everyday, human scale.

History is unlike science in so many ways, but the one that springs to mind right now is narrative.  In that sense, history is more like shoddy journalism - even good journalism - in that it tries to tell a story.  And the failing is that the whole of the truth is sacrificed: the nuance, the periphery, and the way in which life is not quite like fiction or myth; it doesn't have unity of purpose or theme, or specific point. 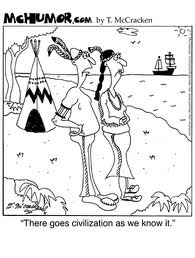 True history is messier, and purposes cross, narratives interact without clarity or precision.  Out of all that, historians and journalists are alike with novelists, trying to create a single strand (or multiple strands) where the full story is so much more complex, riddled with irrationality and strewn with different actors' clutter and concealment.  And of course, it's only one person - or peoples' - truth.  And even then, much of the time the truth will simply never be available.  So, from honourable motives or not, the historian as storytellers will attempt to persuade rather than prove.


I read some narrative in science.  Stephen Jay Gould and Richard Dawkins are good tellers of short stories.  But their tales are much better corroborated and agreed upon.  And if a single essay tells only part of the much wider discipline of evolution and genetics, the rest of it is there for the taking - not the disputation, disagreement, and ultimate irresolution.

Still, for the scientifically-disposed, at least history is better than fiction: there's more truth in it.  And if we long for a cracking good story, then at least we know there's more to it than we're being told.
Posted by S Simmonds at 11:38 pm