wildcats and cows: the manufactured world

Experience with animal husbandry was a significant influence in the ready and rapid acceptance of evolutionary theory when Darwin finally published On The Origin Of Species in 1859.
There has been long centuries of practice in breeding animals, selecting for a given trait (such as placidity) and deselecting for the undesirable. Aggressive cows ended up on the table along with the passive ones, but their genes don't get propagated thorugh breeding stock.
Result: walking larders.  Humans have, over the centuries and millennia, had such an influence on plants and animals that on the one hand as foodstock, the current versions of wheat, cows, and most else, is nothing like the original wild plant or animal - and indeed in many cases the wild original no longer exists.

On the other hand, humans have reduced most dangerous predators to either extinction, isolation, or simply governable. 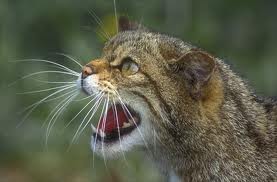 There's a Scottish wildcat still in existence.  It's actually a local remnant of the European wildcat Felis silvestris silvestris - which was inimical to human activity, and so was hunted down over the centuries. Not to extinction, as it happens, but not for want of trying. The larger ones were killed; only the smaller ones got away. Thus artificial selection over time resulted in a wildcat that was not much bigger than the domestic cat, and often mistaken for one.
These two examples illustrate the push and the pull that humans are exerting on the world's fauna: reducing it to either the manageable or the usable - or, with the destruction of wildlife habitat, the ignored.
Climate change is only one side of the anthropisation of the planet:  the spread of human culture has already massively shifted the world's DNA stock.  Globalisation brings an attendant spread of uniform food habits and farming practices - amd is shifting the balance still further.  To push the world's DNA in a very specific direction - to greater uniformity in that which serves humans, is surely making our biosphere less robust to trauma.  The bee colony collapse disorder will be seen as an archetype for that degradation of biodiversity.  The cause doesn't need to be directly human, but the planetary changes that allow problems to become global has only one cause.
Posted by S Simmonds at 1:00 am