I can’t say Australia’s politics will never be the same, but the fact that Australia’s new Opposition leader, Kevin Rudd, can speak Mandarin, may be significant for Australia’s future.

It’s certainly momentous that we have Peter Garrett, ex-Midnight Oils singer, as the Opposition Environment spokesman. Despite the fact that he never wrote the Oil’s lyrics, he’s always been articulate and thoughtful, inclusive of a stint as head of the Australian Conservation Foundation. He was also a candidate for the Nuclear Disarmament Party, and is now at odds with his leader on uranium mining. But that’s quite normal in politics, despite the tabloid headlines.

Garrett will most certainly bump up the ALP vote. Yet under any other circumstance, he would have stayed on the backbenches forever. Although he was parachuted into the safe seat of Maroubra (my own electorate – yes, I get to vote directly for or against him), Garret is not aligned to any ALP faction, which is normally the kiss of death for a political career. But surprisingly, Rudd was able to break the factional stranglehold on the front bench, either through the momentum of his leadership win or because the ALP are desparate. In any case, both leadership contenders had been from the right, so it wasn’t that radical a change. 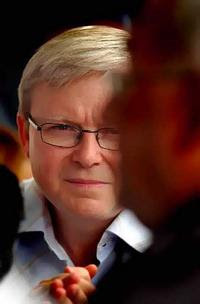 In demeanour, Rudd matches Howard’s conservatism, which should go down well with marginal voters. Yet Howard’s strength as a political player is equally his weakness as a statesman, as Rudd immediately identified: “his talents, skills and abilities are so focused on the arts and crafts of immediate political survival that he has lost sight of the nation's long-term needs, the nation's long-term prosperity”.

As the polls have indicated, next year’s election is now wide open. But as we’ve seen over the past ten years, the gap between now and the election is a lifetime in politics.
Posted by S Simmonds at 7:50 pm