Why is this film a hidden gem? Looking at a few reference books, comments on Beat The Devil ranged from ‘cult favourite’ to ‘undeserved cult favourite’.

Many people saw it as rather patchy, due to a variable pace and talkiness. But there is great enjoyment in the dry wit, and some truly superb delivery.

This is due in no small part to the script (John Huston, Truman Capote), and the presence of another hidden gem, Jennifer Jones. She delivers her lines with such charming verve that she stands out in a high calibre cast. 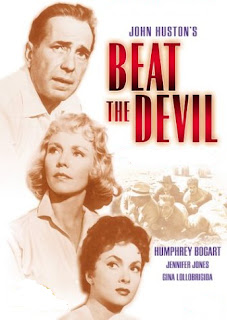 It was something of a parodic take on earlier Bogart films, although the “low-key nature of the comedy eluded many people”, including Bogart, who “doesn’t seem to get the joke”. He notably said “only the phonies liked it” – but it’s easy to tell the comedy doesn’t sit with him, and he delivers the lines like the dramatic adventure film it’s meant to spoof.

Lorre reprises his earlier character, while Morley substitutes for Sydney Greenstreet as seen in Maltese Falcon and Casablanca. Morley is easily the other standout, with a comedic delivery unmatched by anyone here except Jones. Marco Tulli rounds out the band of rogues (with Morley and Lorre) simply because his form adds great slapstick effect to the three of them trotting around together.

The combination of script, Jones and Morley make for a cracker of a film, and the cinematic candy of Bogart, Lorre and Lollobrigida round off a very worthwhile experience.

Chelm: Now look here, this boat is definitely, most definitely, scheduled to sail at 24 hundred hours.

Italian sailor: Scheduled, Mr Chelm, but not, I fear, destined to do so.

[Bogart]: Propeller gone, or is the captain drunk?

Italian sailor: Oh but of course the captain is drunk. But the real trouble is the oil pump…