World: Australia/New Zealand Union: not on 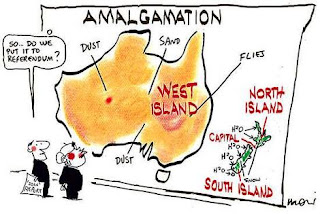 The idea is not new. In fact, it's older than Australia. We federated as a nation in 1901, with provision in the constitution for New Zealand to become part of the federation at a later time.

There is a certain inevitability about the suggestion. New Zealand is just too small to survive on its own in this modern world.

But it's undoubtedly unpopular in New Zealand, and will remain so. Simply, NZ would be swamped by Australia. And contrary to the cartoon above, it would be simply impractical to locate the capital in New Zealand. Sure, we'd like their water, but I believe they're in something of a drought themselves, if not to the length and depth of Australia's. Still, there are certain synergies. For example, we each have our notorious redneck politician. Our Pauline Hanson is much more vociferous and, well, stupid, but theirs, Winston Peters, is... wait for it... Foreign Minister!

Seriously, there is a lot of room to move, in terms of normalising regulatory regimes - much of which has already been done. And the European Union has demonstrated how political union can be achieved, in a practical sense. Much as the EU is distrusted in the UK, what the union has accomplished has revolutionised the global political landscape both as a trailblazer and in providing a counter to the moral, cultural and financial hegemony of the US.

Perversely, given the relative size of the project, I think it would take a lot longer to achieve something similar here.
Posted by S Simmonds at 10:14 pm