In the end, there was so much I couldn't resolve after I'd seen The Prestige the first time, that I had to see it a second time. Comments on the first outing are here - these comments elaborate those. 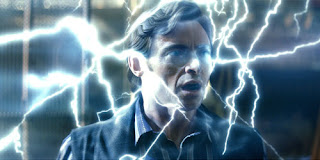 1. The core motif is Obsession
When all is stripped back, the only thing left is obsession. The three main protagonists each face their moment of decision, and they ultimately cling to their obsession more than anything else. This is remarkably similar to Nolan's earlier film Memento, where the protagonist at a key juncture is so pissed off with a character that he writes himself a deliberately misleading note condemning that character.

2. Why Angier killed himself - several times
Angier was fully aware that each time he threw the switch on the duplication machine, he would be killing himself. Why was he unworried? Simply because Cutter [Michael Caine] had said earlier that a sailor claimed his near-death drowning experience was "like going home". He thought he wouldn't suffer. Yet, Caine was simply trying to comfort Angier over the death of his wife, and indicated as much later when he said that it was really agony.

3. Tesla was played by David Bowie
Having read later that Tesla was played by Bowie, I regarded the character's appearance with heightened interest the next time around. But even knowing it was he, I found it a struggle to recognise Bowie in the character. Maybe he was significantly older than when I last saw him; maybe Bowie was such a good actor, with good makeup.

4. Nearly every line in the film spoke to the secrets that were revealed later
There are some detective writers that give the reader the opportunity to work out the solution; others simply show how clever they are without giving the reader a chance. I contend that Nolan never intended sufficient clarity in his clues to discern the truth.

5. What knot did he tie?
"Part of me says one, part of me says the other." Every time Angier asked Borden how he tied up Angier's wife for that fatal trick, he was asking the Borden that didn't do it.

6. The little girl provides the only redemptive warmth in the film
It's a cold work - being so focused on obsession. The girl has her father in the end - and that's it. Caine was touched by this redemption (in fact, engineered it).

7. There wasn't any modern clothing
Contrary to my earlier recollection, there was no scene with modern-day clothing in it. The scene I recalled had relatively non-descript clothing, but it wasn't out of keeping with the time. In struggling with the hidden premise, I forged an assumption that some contemporary element was involved, but that wasn't the case.

8. It is thoroughly impossible to catch all the nuances of the film unless you see it twice
I was resisting the return trip, but there was simply too much I couldn't answer. It all fell in place the second time around. Yet I was pleasantly surprised that I could get enough out of the second viewing to consistently hold my attention.

9. It is worth seeing twice
It's a hard film, but rich and worth watching in many ways.