It's a very easy read, very engaging, and fascinating.

Tammet was born with high-functioning autism in England in 1979. It's a significant disability, beyond question, but there are compensations.

He has found it hard to manage many aspects of life, because of the way his brain is wired. It could be said that it has been difficult for him to apply an appropriate amount of focus to many day-to-day tasks. On some, he spends too much time because he is over-stimulated by the physical or numerical aspects of the task. On others, he doesn't understand enough of what is required, because it's something in which his mind simply doesn't engage.
For example, human interaction has been particularly difficult for him. His mind doesn't process the simple physical and verbal cues that most of us take for granted.

On the other hand, he has a special affinity for numbers - and languages. An overcompensating affinity, in some ways, yet something that enables him to appreciate beauty. Albeit of a different type to what most people understand. 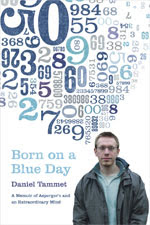 He has eventually learnt mechanisms to deal with many of his obstacles, and to make the most of his abilities.

He first came to notice when he offered to memorise and recite pi for over 22,000 digits, as a fund-raiser for epilepsy, which he has suffered.

That illustrates two aspects about him: his ability and his humanity.

His abilities includes a prodigious memory, very very high maths calculation capacity, and synesthesia. The latter is a tendency for some senses to bleed into others. For example, he sees words as particular colours, and numbers as particular shapes.

He can calculate the product of two large numbers by visualising the two numbers as shapes, where the space between them is another shape, which is the answer.


And incredibly, despite his difficulty with human interaction, he is a very humble, honest, warm person. Something we should all be striving for.

More to come about his abilities. Meanwhile, I thoroughly recommend the book.
Posted by S Simmonds at 10:04 pm