Why care about WiMAX?

WiMAX is Yet Another Telecommunications Protocol.


For what it's worth, it stands for Worldwide Interoperability for Microwave ACCess. I'm nowhere close to being on top of all them protocols, but I attended a presentation recently (by a bloke from Nortel) that suggested there was a big future in WiMAX at least. From that presentation comes a few points of interest.

WiMAX emerged as a standard for wireless broadband. Its appeal in the protocol wars is primarily an issue of speed.


The presenter indicated that wireless broadband and mobile phone technology are converging: the first is focused on data transmission, with an increasing voice component, while the second is voice transmission with an increasing data component. Thus, “3G” is a mobile phone standard for data delivery (voice with data), and WiMAX is a data with voice. However, Wimax doesn’t need to be backward compatible with legacy protocols, as does mobile transmission standards. So it emerges as much faster, much cheaper. And as a technology, it’s said to have a two to three year lead over 3G.

Among the interesting side points to arise from the presentation: latest US figures: 60% of new broadband installations are wireless. Wireless will only get bigger, as the economies over running cables hits home. 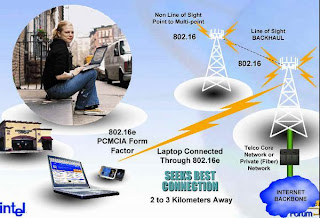 A further interesting point was a method for increasing bandwidth (speeding up the internet connection) - increasing the number of antennae on a device (!). It’s called MIMO –Multi Input, Multi Output. The presenter mentioned four antennae as an increasingly accepted standard. This doesn’t mean four different prongs sticking out of your laptop; just four different receivers. The antennae themselves would be secreted within the computer itself, as they are now.

If I understood correctly, the presenter indicated that there’s an effective monopoly on use of WiMAX in Australia. There were two players with access to the technology – and one had bought the other out. Apparently one that slipped under the radar of the regulatory authorities.


The most significant message to emerge (or be reinforced) from this presentation is that we should expect to see a convergence between all these different technologies, to the point where it’s relatively unimportant what’s transmitted, how it’s transmitted, or what device receives it. And we should expect it to get cheaper, faster, easier, and more permanently connected.

On the flipside of that, will be the absolute proliferation of devices that are connected. The internet fridge was a premature concept, but given a few decades, we can’t say what won’t be integrated into our everday life.

Update 19-Feb-07: Big Investment in WiMAX
Heavyweight tech companies Nokia and Siemens - about to merge their Network divisions - has indicated to Australian telecommunications newsletter Communications Day that they plan to invest as much in WiMAX as in all traditional mobile technologies combined.

A significant boost for the technology.
Posted by S Simmonds at 9:39 am