This portmanteau film has garnered a heap of praise. It encompasses four groups of protagonists (not three, as some reviewers claim) in three different countries, whose stories are united, sometimes tenuously.

It is a film, I have to say, that I got less from than expected, given the hype. The title refers to people out of their depth in their need to communicate - language is a barrier.

However, this doesn't apply to all the sets of protagonists, and therein lies some of the problem. It unites all the stories through an incident where an American tourist is accidentally shot. It deals with the shooter (and family), the victim (and husband), the victim's children, and the daughter of the man who originally owned the gun. But the attempt to create a unity is strained, by the sometimes tenuous nature of the connections. Moreover, any attempt to apply a symmetry to the four (not three) stories is always going to be doomed. In varying permutations, you can apply a philosophical point to three out of four of the stories, but not the fourth.

You could say that language divides - but not in every story, and it's not always a fulcrum of the story. You could say that there are bad decisions made by some people (but not all), whose echoes ripple on. Yet there is one point that does seem to be made consistently by the filmmaker: all may suffer, but the ones who continue to suffer [after the film ends] are only those protagonists that come from the third world. That is an unsurprising point from a director who comes from Mexico, however I haven't seen this discussed in any other reviews.

However, to give the film some credit, have a look at this review. Rather gushing, but it does play to the film's strengths, much as this post plays to its weaknesses. There are, after all, a lot of redeeming features. 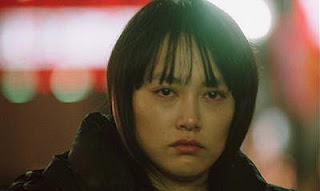 PS Great credit must be given to the actor who plays the deaf japanese girl: Rinko Kikuchi. A superlative performance.
Posted by S Simmonds at 10:52 pm

Email ThisBlogThis!Share to TwitterShare to FacebookShare to Pinterest
Labels: film