The long-running, tawdry debacle is over. The daylight is upon us, etc etc. I finally have a computer that works.

When insurance replaced my laptop, they provided the best match to my original specifications, within the same brand. That means I got a computer with a dvd reader, internal wireless, and 512M memory. As a bonus, I ended up with a dual processor CPU.

The replacement computer came with Windows Vista installed, and it ran like a dog. 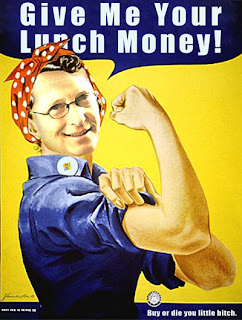 It was fine with any single application (bar Photoshop). But when switching, it had to page fault, and there came the rub. Sometimes it would hang for a couple of minutes at a time, and if I foolishly tried to click on something, or bring up task manager, it would remain frozen, then a couple of minutes later it would painfully run through all the mouse clicks and keyboard commands I'd entered in the interim.

Matter of fact, same thing would happen with most OS-level work.


Vista could barely function with 512M on its own, and even then was capable of a dummy spit.
I rang the manufacturer (Acer). They said that Microsoft had jumped the gun and installed Vista without consultation. They said I could cart the laptop all the way off to Fairfield for a memory upgrade, or cart the laptop all the way to Fairfield to get a de-install, and revert to XP.
The saga continued through a series of false starts, and two goes at getting 1G of memory from Dick Smith – who consistently supplied incompatible chips.


Eventually I got a Gig installed by Laptop Specialist of North Sydney – cleanly worked first time, thanks guys.


It makes a world of difference. It's like the new computer I should have had in the first place.


I note here that if you look to purchasing Windows Vista in a shop, the box will say minimum requirements include 512M. That's a lie. It will function, but in a totally unacceptable way. I don't know how 1G will work, but 1.5G will give you the usability you have a right to expect from an Operating System.


Microsoft should be more honest. They are not going to preserve their brand this way. In fact, this is simply the arrogance of a monopolist, not an organisation that cares about its reputation.
Posted by S Simmonds at 9:23 pm