In January I discussed The 23 Enigma for quite valid reasons: I worked on the 23rd floor, my birthday's on the 23rd, and I live at number 23. 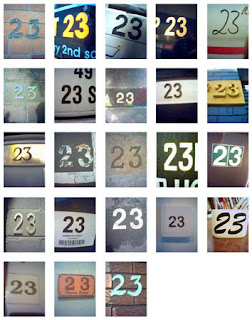 Obviously, the film's writer has also read about the 23 Enigma, a deliberate search for meaning in coincidence. So, by coincidence, the film followed hot on the heels of my post.
Spooky or what?

The answer is more "what" than spooky. The bottom line is it's a test of one's intellectual fortitude.*
The film itself is very good. Walter Sparrow gets caught up in a book that both reflects his own life and obsesses over the number 23, and its seemingly relentless appearance in all facets of life and world history.
It might seem that the whole crux of the film is the 23 Enigma, but it's more about obsession. As Walter reads the book, we see very stylish enactments of passages from the book. As the book's protagonist gets exposed to the 23 phenomenon and starts obsessing, so does the protagonist in the film. In fact, at one point a character in the book tells a story, so we get a story within a story within a story. [and this narrative compounds the spiral :) ] 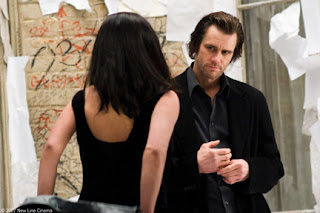 It may sound convoluted, but the film's exposition makes it clear enough - particularly through the significant cinematic differences between film narrative and book narrative, from set design to filter to editing to lighting.
The writing is very good, and the acting brings it to life well, breathing naturalism to the main narrative, and counter-naturalism to the book sequences.
Strangely enough, the film has garnered overwhelmingly negative reviews. The most positive comment I've seen is from this review in the Herald:

"This thriller's biggest mistake is its belief that it's as clever and original as it is visually stylish."

It is undoubtedly stylish. How original and clever is it? To a large extent (albeit not completely so), it is. I think it is higher than average Hollywood, and is more original and clever than a lot of non-Hollywood films.
There are some creaky points, but no more so that average. And it is sufficiently engaging, while being well-made.
The ending is pure Hollywood: a triumph over adversity, of sorts.
Further, it depicts a family in a positive, naturalistic, and non-cloying way, just when you may think all protagonists of Hollywood thrillers (I use this term somewhat loosely in this case) have no family, or family that only serves as hostages or one-dimensional foils.
And finally, the concluding message is affirming and mature.
To paraphrase on my own terms: the best depiction of life is as a set of challenges, that give you the opportunity to better yourself and others.

* 23 is a relatively low number. You can easily find it in a number string, or arrive there by manipulating small number sets (such as dates) to make 23. Especially if you do it in varying and arbitrary ways.
Posted by S Simmonds at 5:50 pm