But Sydney doesn't think it's better than Melbourne - Sydney just doesn't care. Maybe because it is the biggest city.

Once, I didn't care for Melbourne, or Canberra or Newcastle. Now I'm mature enough to appreciate them – particularly what is better about them than Sydney.


Melbourne. The weather is usually milder. The city has wide streets lined with trees. And more of its grand old buildings are preserved. 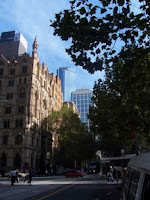 You could say on the whole that it's more civilised than Sydney – in a refined sense, as opposed to a large-city sense.

Most of my visits to Melbourne have been brief business trips. On one of the few more leisurely visits, I was very pleased to stumble upon Fitzroy, an artier, more upmarket version of Sydney's Newtown. Of course, Brunswick Street is especially vibrant, but you should take some time to explore its side streets.


Last week was just a quick business trip. I flew down the night before - Anzac Day, so not much was open. The hotel could only recommend one precinct close at hand that would have a bit of food and drink – the casino and environs, just across the Yarra river.


Of course, there wasn't much to recommend. Some upmarket shops and restaurants, everything overpriced, and the casino was a bit tragic.


I eventually found myself on the other side of the hotel, more towards the city. I wandered into a tiny pub, and it was packed. There was a standup comic down the other end. He wasn't saying much about anything – sort of like Seinfeld, but funnier. Everyone was laughing.


The following day, I stole the time for a lunchtime stroll around a few blocks of the city. The traffic rules are a bit alarming for a non-native, and the trams are particularly scary, as they bowl along the middle of the road in near silence, and so can be on top of you before you know.


Still, the day was pleasant, and the vista – the buildings, the trees, the spaciousness – was quite enjoyable.


I stumbled upon a wonderful science fiction (and associated) book shop called Minotaur. It held the only shelf space I've ever seen that was given over to the entire range of Hugo and Nebula award winners – in chronological order.

As I said, Melbourne is civilised.
A great place to visit.
Posted by S Simmonds at 10:35 pm