Dan Brown: must be something better!

The trouble is, I'd be quite keen on a book that blended mystery, thriller, history, and puzzles. It's a shame Brown is not the answer. So, having read The Da Vinci Code, why did I persist with his previous book Angels And Demons?

Why indeed? Angels And Demons was like a wheel spinning uselessly in air. More that that, it could easily offend. (the easily offended, at least.)

Where do I start?

Why tell the reader how the protagonist feels, when you can show, by their actions, expressions, etc? Well, in Brown's case, why tell when you can both show and tell in consecutive sentences? Dammit, he does this constantly.

A & D consisted of the Da Vinci character spending the whole book a) trying to prevent the consecutive murders of four cardinals - and failing; b) trying to prevent a bomb from blowing up the Vatican - and failing (someone else did the saving); c) mistaking the villain for hero and vice versa, nearly up to the end. In fact, there's little reason for the protagonist to have got out of bed at all. Oops, Brown did pair him up with a woman at the end of the day (oops, that woman had departed again by the next novel).

What about the thorough implausibilities? Such as jumping out of a helicopter from a great distance without a parachute - and surviving.

What about the appalling science? Such as maintaining a large - visible - amount of antimatter for more than a nanosecond. Oh, and the ridiculous claim that antimatter has potential as a harnessable energy source.

In fact, Brown demonstrated very clearly - in a book whose central dichotomy was a struggle between "Science" and "Religion" - that he really, really, didn't understand either at all. And he thinks that many scientists really really hate religion, and many religious people hate science, and they each think the other is responsible for all the world's ills.

And don't you just hate the way Brown mixes history with ahistory (that which has proven to be wrong), to the point where you can't tell what's true unless you do more research than Brown did. (which isn't hard.)

Oh give up. If that wasn't enough, they're planning a film of Angels and Demons - again with Tom Hanks as lead. What less could you want?

So I've been seeking out other mystery/thriller/puzzle/history books. And there's a lot. Much of it riding on the coat tails of Dan Brown, and probably vice versa for the rest. 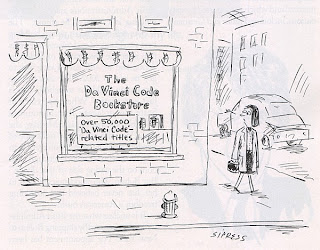 Labyrinth, by Kate Mosse, is readable. Not fully satisfying in the end, but certainly more so than Brown.

I might also seek out The Eight, by Katherine Neville - said to be rather good. And maybe something by Steve Barry - mass market again, but apparently a more competent writer than Brown. Also possible: The Rule Of Four by Ian Caldwell.