Consumer confidence is a rather bizarre but meaningful economics measure. It attempts to gauge how likely people are to spend, and thus keep the economy ticking over. So it's a leading indicator of activity, ie a predictor.

Consumer confidence in Australia is at its highest level in the 30-odd years it's been measured. Why? The two most obvious reasons are interrelated. 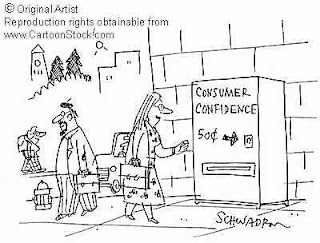 First, Australia's unemployment level is at its lowest in about thirty years. (This is to say nothing about the quality of those jobs - ie whether they're part-time, casual, or otherwise less than a full job. There has certainly been a substantial casualisation of jobs over that time, accelerated in recent times by the Howard government's industrial relations changes.)

Employment levels in turn have been attributable at least in part to Australia's biggest mineral resource boom in 50 years, due specifically to demand from China.

Of course the government takes all credit for the positive economic indicators. As they would. But ironically, as they falsely sow, so they reap. Precisely because consumer confidence is high, the voting public is relatively heedless of Howard's attempts to portray the economy as only safe in his hands. People currently have a certain buffer of comfort from which to take a more dispassionate look at how they feel about Howard.

In the 2004 federal election, the tide was turning against Howard - until he successfully played the economic fear card.

Currently, the electorate as a whole is expressing more concern about human issues, such as industrial relations, health, and education.

And consumer confidence can explain a fair part of the difference.

There is a warning sign, however. House prices in most capital cities are substantially higher than they were five years ago. To a large degree, those people who have bought a new home in the past five years are under financial stress due to the level of commitment to their home loans. And mortgagee sales are up in recent times.

If and when unemployment goes up, we should not expect a soft landing.
Posted by S Simmonds at 9:59 pm