Lessons for climate change from the smoking debate?

“Only the most bigoted can possibly deny the weight of evidence against the cigarette: heavy smoking increases the chances of developing lung cancer. If the original statistical data… were not convincing enough, in the subsequent five years 19 additional and quite independent investigations in six different countries have established the point with a greater degree of certainty than that of almost any other correlation between any known disease and its cause.

“Yet there is a widespread feeling that the case against smoking cigarettes is not complete because no causal relationship has been established. This opinion is based on the fact that the mechanism by which smoking produces tumours is currently unknown. But exactly the same criticism applies to many other diseases, the causes of which are accepted without question.”

It’s pointless trying to persuade climate change deniers. They’ll always be there, on the fringes. The problem is, how to convince voters and politicians that the jury is NOT out.

It took decades for action to be taken over cigarettes. And that action may not have been what was initially expected:
- lawsuits;
- loading them with high taxes;
- reducing amenity through smoking bans in workplaces and public places. 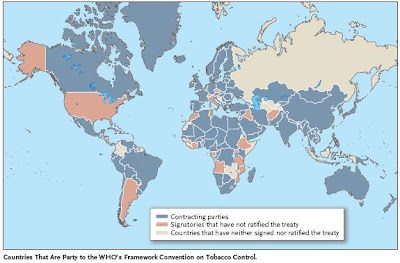 Yet smoking was a relatively trivial issue, with the health issues limited and the doubt-sowers largely restricted to tobacco companies.

Contrast with Climate Change, where ‘the world as we know it’ is at stake (including significant biodiversity issues), the vested interests are more powerful and more widespread, and our whole economic infrastructure is affected, either side of action or no action. And we don’t have as much time to ameliorate the impacts.

The parallels illustrate well the difficulties in turning the ship around. But engaging the deniers is a distraction.

I hope there are further lessons from that earlier struggle of science to be heard.
Posted by S Simmonds at 5:37 pm