It's funny what turns up.

I finally got around to reading a book that had been lying around for a while - a reject from Parramatta Library.

The Mule's Foal, by Fotini Epanomitis, was published in 1993 with assistance from the Australia Council for the Arts, a Federal Government arts body. It won the Vogel Award, which gives it instant pedigree. Still it languished on the shelves of Parramatta Library, and on mine. 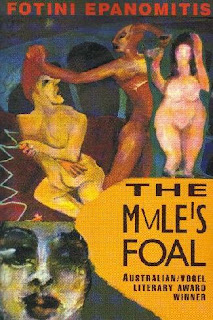 It's quite a read. Funy, fabulous, very entertaining, and surprisingly short at 150 pages. It's very much in the style of magical realism; it's hard to imagine the author not having read Garcia Marquez' 100 Years Of Solitude.

It's set in a small Greek village, where life is a grind, death is cheap, and Turks are by turns villains and friends. Unnatural weather and actions are equally unsurprising, everything strange is treated as everyday, and the everyday is uncommon.

The week that Theodosios announced the sharing of the fields it had been forty degrees every day. At his son's kafeneio Theodosios announced that the fields of the League of Good Men, the fields of the marshland, would be shared amongst the people of the village. Every single family would get something (even the Turks and the whores) and those with little or no land would get two fields. People did not know whether Theodosios was a criminal, a mad man or a saint. He gave to widows, to Turks, he gave to the beggars and to the rich. Some were confused, some were furious. Could Theodosios do this, they wanted to know? The widows of the League of Good Men had been celebrating at the kafaneio every week since the disappearance of their husbands, and they made no claims to the fields.