A recent analysis of bird DNA has reported some corrections to the phylogenetic family tree. The study, published in the journal Science, looks to be an equal collaboration between a scientists from a number of American universities.

They report corroborating some contentions groupings (eg flamingos and grebes), and making some surprising new groupings (eg hummingbirds with nighthawks). Some conceptual rearrangements were called for too, for example regarding flight vs flightlessness and nocturnal vs diurnal traits.

New Scientist reports some comments on the study indicating some of the findings are disputed. One, for example, places the flying order tinamous right in the middle of ratites, which comprise the majority of well-known flightless birds, including emus, kiwis, ostriches and moas. 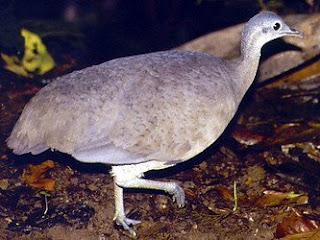 Tinamus major
Tinamous and ratites had already been nestled together in a superorder called Palaeognathae, whereas all other birds are grouped as Neognathae. The fossil record of tinamous, from South America, is poor, only going back 10 million years where the ratites go back to the cretaceous, over 65 million years ago.

Palaeognathae were thought to originate in the southern Gondwana continent. However, more recent DNA analysis, although confirming the monophyly of ratites, appears to show they diverged to recently to share a single Gondwanan ancestor (see discussion here). According to Colin Tudge (The Variety Of Life), a hallmark of the ratites is a lack of deep keel on the breastbone for flight muscles, so including amongst them a flying bird might be unexpected. In fact, most species of tinamous are poor flyers.

These facts in themselves are suggestive that tinamous had, to some extent, re-evolved flight. This would not be out of keeping with the length of lineage of the Palaeognathae.

As I said, the findings haven't met with universal agreement. The study was based on 19 regions of the bird genome, covering 32,000 DNA letters. I'm not qualified to comment on whether this covers sufficient ground, but disagreement on some of the findings would surely revolve around this issue.


Regardless, we should not be surprised to find DNA analysis forcing changes to phylogenetic trees. This has been the exception rather than the rule. We move from systematics predicated on apparent equation of form to that based on the genetic blueprints. The failings of form-based systematics remind us constantly of convergent evolution: that given enough time, the evolutionary path of different animals in similar environments has followed similar paths. The randomness of genetic change provides the differences, but environment trumps that chaos, and steers.
Posted by S Simmonds at 2:11 pm