Reading the paper last night, I learnt of the death of Jerry Wexler a few days ago. Not too well-known outside music circles, his influence is still very widely felt, in particular as executive and producer at Atlantic Records. Coincidentally, at the time of reading, I was listening to an Atlantic album: the eponymous Bette Midler (a protege of Wexler's partner Ahmet Ertegün, whose passing I noted in December 2006).

Although Wexler wasn't a founder of Atlantic (he boarded in 1953, insisting on partnership), he had already made his mark in music by then. Inter alia, he was credited with the neologism "rhythm and blues" in 1949, when he renamed Billboard magazine's black music chart, formerly known as "race records". 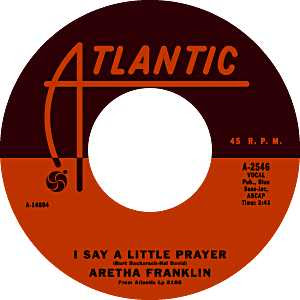 Always keen on black music, he was instrumental in the careers of Ray Charles and Aretha Franklin in particular, although not so keen on the whitey music of Led Zeppelin and Crosby, Stills, Nash and Young. He had, however, been keen to sign the little-known Elvis Presley, but lacked the $10,000 to clinch the deal.

It was Wexler who was represented in Ray, the biopic of Ray Charles, as the latter's record executive and producer.

He was also a keen proponent of the Muscle Shoals Rhythm Section, white Alabama session musicians who he used to great effect for Wilson Pickett, Aretha Franklin, Dusty Springfield, amongst many others. He recorded many seminal works there, for example coming up with the rhythm track for Pickett's In The Midnight Hour, as well as producing Frankin's Respect, I Say A Little Prayer, and many others.

Atlantic also signed Boz Scaggs for one album in 1968; coupled with the Muscle Shoals team, this resulted in one of Duane Allman's greatest recordings, on Scaggs' Loan Me A Dime.

Wexler left Atlantic in 1975, which putatively signalled the end of his career peak. That period would see his involvement with Dire Straits, George Michael, and Bob Dylan's born-again album, Slow Train Coming. But his work over the three prior decades had already altered the course of popular music.