The persistence of cryptozoology

Things wash up on beaches. Apparent proto-humans and bizarre dentiture. Hunters. What do they have in common? Cryptozoology, the study of hidden animals (or, in practice, the search for animals claimed but unverified).


Darren Naish's Tetrapod Zoology site is always an instructive read. In posing a question in a recent post, he illustrated the capacity of a good story to spread far faster than a good explanation.


He discussed the so-called "Montauk monster", a beach find from July in New York. It might look like a relative of a skinned chicken, or... something - except that it looked so odd as to appear faked (which the photo and the specimen weren't). Still, the UK Telegraph newspaper saw fit to write it up as remaining a mystery, four days after Naish unpicked the whole story (and he wouldn't have been the first). 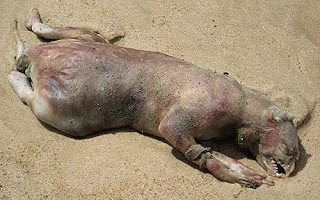 The greatest puzzlement was in the jaws. The lower jawbone had teeth, whereas the upper mouth looked much like a toothless beak. Definitely a recipe for chimeric mythmaking.

Yet as Naish details it, the answer lies in taphonomy - the study of the decay of organic matter over time. Carcasses in the water bloat; mammalian fur drops off, facial tissue decomposes - as does that on hands/feet/paws. In summary, the most recognisable features of a creature are lost. In the case of the Montauk monster, the beak-like snout is simply the skull becoming exposed at that point earlier than elsewhere. And so, on Naish's blog he reveals the creature as simply a watersodden raccoon. A very good juxtaposing illustration settles the matter.

Partial decomposition is the mystery, and the answer. Someone with a background in animal taxonomy - or palaeontology - should be well-equipped to see past the mask of unfamiliarity.


The two American hunters who recently claimed to have a bigfoot specimen barely merit a mention, of themselves. They said that they had tried to freeze the body, but the freezer broke down - which would leave the creature in a convenient state of ambiguous decay. Still, they claim to have "the DNA evidence". Other claims could be open to dispute, but this one will bring them unhinged. They would need negative evidence, however - analysis to show that the creature's blueprint did not resemble any known creatures (at the very least - let alone its proximity to any known taxa).

Humans have spread so comprehensively over the planet that it's vanishingly unlikely that a breeding population of any unknown creature - of any noticeable bulk - is possible.

The most plausible location for decent cryptozoology - the most underexplored regions of our planet - would be the deep sea. All manner of mechanisms develop over evolutionary time that would look particularly strange outside the pressurised, light-reduced depths. In the wake of the 2004 tsunami, I saw web pages with a variety of creatures that purported to be sucked from the deep by the oceanic forces. They may have been faked, but as far as I know, at least the scenario is plausible. More than I can say about two hucksters with business to drum up. Which may be the ultimate story behind most "cryptozoology".

Update 20-Aug-08: A new report on the purported bigfoot above reveals the rubber costume behind it. Quotes include "it's all about money" and "it is still unclear why a Clayton County police officer" (one of the charletans - who have since disappeared) would defraud, but "these are not very intelligent individuals". If Fox news reports are true (!), the one they successfully defrauded was a mickey of a bigfoot investigator who paid them an undisclosed advance. So, no damage done really. Names not included here, as they do not deserve it.
Posted by S Simmonds at 9:46 pm